On Health Care Reform: An Open Letter to my Congressman, the Honorable Edward R. Royce (R-Ca) 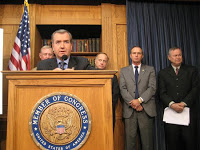 To the Honorable Edward R. Royce:
I recently read your Investor’s Business Daily column, which advocates against the public insurance option at the center of the health care reform legislation currently before Congress. While I agree with you that market-based solutions are usually best, I think we have to face the fact that health care is one marketplace that is not best served by the private sector.
Your column overstates the current health care reform legislation as yet another attempt to create a “politically controlled economy.” The financial and automotive industry bailouts were necessary corrections, but they hardly represent attempts to create a socialist state, as your column implies.
I also disagree with your assessment that Fannie Mae and Freddie Mac are examples of the failure of government backed institutions. While Fannie Mae and Freddie Mac certainly played a role in the current financial crisis, private mortgage lenders, and their “creative” financing and payment options for subprime loans, drove the housing bubble while lending by the government sponsored enterprises contracted. In fact, while the credit bubble was peaking from 2003 to 2006, the amount of loans originated by Fannie and Freddie dropped from $2.7 trillion to $1 trillion. Meanwhile, in the private sector, the amount of subprime loans originated jumped to $600 billion from $335 billion and Alt-A loans hit $400 billion from $85 billion in 2003. If anything, the strict regulation imposed on Fannie and Freddie as a result of their government sponsorship prevented them from getting into the trouble or levels of leverage taken on by purely private lenders.

Like you, I agree that market-based solutions are often best for the vast majority of industries like aerospace, automotive, travel, advertising, clothing, agriculture, software, technology, housing and just about everything else. The American way is competitive capitalism. But the delivery of affordable, quality healthcare to all Americans is clearly undermined by the huge administrative costs and profit-taking of the insurance industry.

I urge you to vote in favor of the health care reform bill currently before Congress.