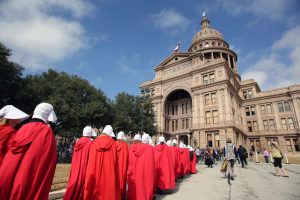 The Handmaid’s Tale is a cautionary story about theocracy in America. Photo: Vic Hinterlang / Shutterstock.com

Just as many on the Right see Obama as the head of a spear of a radical left-wing poised to destroy the liberties granted by the Constitution, those of us on the Left see the Tea Party and Santorum, Bachmann, et al, as the tip of a spear of a radical evangelical movement that seeks to break down the separation of church and state and impose a totalitarian theocracy here in the US.

Recent examples include Santorum’s queasiness with JFK’s statements about separation of Church and State and the radical, evangelical pastor who introduced him last week, ranting about the US as a Christian Nation.

If Ayn Rand’s “Atlas Shrugged” has provided a guiding cautionary tale for the GOP’s brand of small-government libertarianism, then Margaret Atwood’s “The Handmaid’s Tale” is an equally important text for those of us on the Left who see the emerging threat of an Authoritarian Theocratic regime here in the US. The Nazis seemed civilized, as they sipped fine Rieslings and listened to Beethoven while committing unspeakable atrocity. We should remember that many Germans, including my great-grandfather, a German Jew who fought for Germany in World War I, never believed the Nazis could implement the Final Solution.

Just as the Right is spooked by Jeremiah Wright, and believes that Obama is the embodiment of the most extreme statements his pastor uttered over the past 40 years, those of us on the Left are spooked by the likes of the Louisiana pastor who introduced Rick Santorum. As the Tea Party sees a Jeremiah Wright, anti-white form of Socialism embodied in the US Presidency, I see the threat of totalitarian theocracy in the Tea Party controlled GOP Congress and right-wing militias.
The main difference, of course, is that Obama has not implemented or recommended a single policy that is socialist or statist. While he has, disappointingly, extended many of the authoritarian positions Bush/Cheney implemented with the Patriot Act and the AUMF, he also removed Single Payer and embraced the Heritage Foundation/Mitt Romney approach to health care reform, and he allowed for expanded drilling, oil production and pipeline construction.
So, Obama is a bi-partisan moderate. But the Tea Party has transformed the GOP into a party driven primarily by extremist social conservatives, embodied in the recent rash of right-wing state legislatures passing pre-abortion ultrasound bills with “shaming rooms” and the racial-targeting of voter ID laws. Obamacare is not part of a war on religion, but the Tea Party and its leading candidates and GOP-controlled state legislatures have initiated a war on women. While the current US evangelical movements have merely burned Korans, not beheaded hostages, that does not mean “It Can’t Happen Here.”
There’s a Bill Maher video where he shows that Islamist extremists are much worse than US ones. And that’s true, based on post-KKK US history. But, at the end of the video, he explains that those differences rest on the foundation of a government and politicians that honor the separation of church and state and rights for women.Those are the rights now under attack by the leading GOP candidates and by the US Congress and GOP-controlled state legislatures nationally. And that is why left-wing fears are not unrealistic or absurd, but instead based on evidence, data and recent history — not the hysterical exaggerations, caricatures and ranting of Fox News and right-wing talk radio.
Facebook Comments