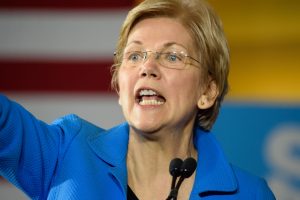 “I hope that Sen. Warren will run for president in 2016 to force a national conversation on the Washington-Wall Street power nexus,” The American Conservative’s Rod Dreher wrote. “Hillary Clinton won’t talk about it. You know that no Republican presidential candidate will talk about it (with the possible — possible — exception of Rand Paul). We all need to be talking about it. A populist who talks like Elizabeth Warren and really means it is a Democrat a conservative like me would consider voting for, despite her social liberalism.”

While there appears to be some alignment on this issue between the far right and left, there is an ideological split underlying the debate. For example, Democrats and Republicans have two completely different responses to the Great Recession of 2008. Libertarian conservatives, who control the GOP agenda, didn’t want bailouts and would have preferred to let the banks fail and have America experience another Great Depression.

They believe that the only way for Americans to be free is to learn the lessons of the Depression the hard way, the way our parents and grandparents and great grandparents did. Let the market work the pain through the system, FDR be damned.

So, does Rod Dreher dig Warren because she has a spine? Or, does he actually agree with her call to keep the Dodd-Frank regulation in place? Is there some new breed of moderate conservative commentator emerging?

According to the conservative “no bailouts” line of thinking, if Americans had experienced massive poverty and a Depression due to the housing crisis, that would have been preferable to bailouts. The magical free market and private charity would have cared for all. Trickle-down economics would have eventually created prosperity as benevolent “job creators” let the “invisible hand” pick winners and losers based on their true worth and hard work, freed from the shackles of affirmative action and state-sponsored welfare. It’s a completely ideological argument that has a humanitarian message at its core, even though it is a completely utopian, Ayn Rand fiction-like way to make public policy.

Democrats on the other hand would rather have us not re-learn the lessons of the Depression first-hand, but believe we should learn from the lessons of history and apply government policy like FDR’s, so we can stave off the pain and suffering wrought by a depression.

We don’t want bailouts either and want to create policies like the one in Dodd-Frank that was just eliminated, which will make it less likely that a bailout will ever be necessary.

The point of a Federal  regulation like Dodd-Frank and Glass-Steagall is not to create a Big Government takeover, but it is to eliminate pain and suffering, literally the massive starvation and death (and that doesn’t even include the impending fascism) brought by depressions.

Along with regulation, fiscal stimulus is also essential to allow for a healthy form of capitalism. Stimulus spending in infrastructure and development is temporary, and once the private economy gets back on its feet, public spending can pull back. Why is it so hard for Democrats to communicate that message?

Perhaps a notion of “Healthy Capitalism” is one that Democrats could embrace as it would have broad appeal to independents. Helping voters understand that most Democrats are capitalists who just want the right mix of public spending and regulation to allow capitalism to work could be a winning message. This is what worked in the US from 1932 to 1981, helping most Americans grow and prosper and not just the elite, billionaire class.