Why Did They Write the Second Amendment? 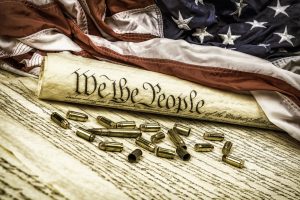 What is the exact meaning and scope of the Second Amendment? Photo: Shutterstock

It’s interesting to think about why the Founders needed the Second Amendment when the power of Congress to organize the Militia was written in Article I, Section 8 of the Constitution:

“To provide for calling forth the Militia to execute the Laws of the Union, suppress Insurrections and repel Invasions; To provide for organizing, arming, and disciplining, the Militia, and for governing such Part of them as may be employed in the Service of the United States, reserving to the States respectively, the Appointment of the Officers, and the Authority of training the Militia according to the discipline prescribed by Congress;”

Gun-rights advocates, please take note: it clearly states here that the purpose of the Militia is to suppress insurrections and repel invasions — not to overthrow the government.

And, as Jefferson, Hamilton and Madison all wrote, one of the main reasons they wanted Militias was to avoid having a standing army, which was a trademark of tyrannical governments in Europe.

In a 2013 interview, Ruth Bader Ginsberg said, “The Second Amendment has a preamble about the need for a militia … Historically, the new government had no money to pay for an army, so they relied on the state militias,” she said. “The states required men to have certain weapons and they specified in the law what weapons these people had to keep in their home so that when they were called to do service as militiamen, they would have them. That was the entire purpose of the Second Amendment.”

So, they needed the 2nd Amendment to ensure that the troops would have arms — and it also gave them the right to bear arms divorced from the need to get them from the Federal government, which could also take them away. The 2nd Amendment was placing both the right and burden of bearing arms on the people and the states and it was a way to not have to finance it.

And while the 2nd Amendment was clearly about bearing arms in the context of a Militia, there is at least one indication in Hamilton’s Federalist Paper 29 that letting the people bear arms also did provide protection against the Federal government in those instances when a large army needed to be called up. This is the quote the gun-rights advocates should be putting on their memes, not the fake George Washington quote they always pass around. Hamilton wrote:

“if circumstances should at any time oblige the government to form an army of any magnitude that army can never be formidable to the liberties of the people while there is a large body of citizens, little, if at all, inferior to them in discipline and the use of arms, who stand ready to defend their own rights and those of their fellow-citizens. This appears to me the only substitute that can be devised for a standing army, and the best possible security against it, if it should exist.”

Of course, too long and too complex in thought to fit on a meme or a bumper sticker. Also, not actually written in any law and best read in the context of all of Federalist 29 and Article I, Section 8, but it is the only quote I have seen that gives some credence to the notion that the 2nd Amendment was at least partially intended to arm the people against a tyrannical government in command of a standing army.

In 2008, the Heller Decision by the Supreme Court was the first time in US history that the right to bear arms was specifically validated as an individual right separate from the context of serving in a militia. But in the majority opinion written by Justice Scalia, it clearly verifies the right of states and government to regulate and ban weapons:

“Like most rights, the Second Amendment right is not unlimited. It is not a right to keep and carry any weapon whatsoever in any manner whatsoever and for whatever purpose: For example, concealed weapons prohibitions have been upheld under the Amendment or state analogues. The Court’s opinion should not be taken to cast doubt on longstanding prohibitions on the possession of firearms by felons and the mentally ill, or laws forbidding the carrying of firearms in sensitive places such as schools and government buildings, or laws imposing conditions and qualifications on the commercial sale of arms.”

“There seems to us no doubt, on the basis of both text and history, that the Second Amendment conferred an individual right to keep and bear arms. Of course the right was not unlimited, just as the First Amendment ’s right of free speech was not”

One question Heller leaves open is whether or not the AR-15 and similar rifles can legally be banned. That will likely come down to what “and the like” means in this part of Heller — Heller opinion cited “the historical tradition of prohibiting the carrying of ‘dangerous and unusual weapons,’” such as “weapons that are most useful in military service—M–16 rifles and the like.”