Power to the President 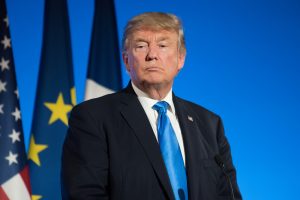 “The lies told by powerful men—and the thanks heaped on the most powerful man of all—are the language of a dictatorship.” Photo: Frederic Legrand – COMEO / Shutterstock.com

The New Yorker‘s Masha Gessen has published a scathing review of Trump’s new tax bill, “The Most Frightening Aspect of Trump’s Tax Triumph.” Between the many lies used to sell its passage and the sycophantic praise heaped upon Trump following its passage, Gessen notes that the US is experiencing propaganda never before seen in the US or in any functioning western democracy:

“Donald Trump has scored a legislative victory with staggering costs. The price of the tax bill has to be measured not only in the loss American society will face in the increase in inequality, in the impact on public health, and the growth of the deficit, but also in the damage to political culture inflicted by the spectacle of one powerful man after another telling lies of various sorts.”

Trump and other Republican supporters of the bill lied repeatedly to sell its passage. For example, Trump said in a speech in St. Charles, Mo. on November 29th that the tax bill “is going to cost me a fortune, this thing — believe me. Believe me, this is not good for me.” But that is completely untrue and he knew it was a lie when he said it.

“Political speeches are rarely occasions for truth-telling. But the good ones combine a description of shared reality with the expression of a vision, or with words of celebration. The mediocre ones consist of platitudes—well-intentioned but lacking the force of inspiration or recognition. And then there is the genre of the thoroughly insincere pronouncement that is all empty ritual. This is not normally observed in countries with functioning democratic institutions, because hollow words are the very opposite of accountability. These kinds of speeches are usually given in dictatorships: their intended audience is not the public but the tyrant. This is what we observed in Washington on Wednesday, and it’s the scariest part of Trump’s big tax triumph.”

Masha Gessen has lived and worked as a reporter in Russia and in former Soviet states. She is an astute observer of totalitarian countries and the tactics used by their leaders. Americans should heed her warnings and stay alert to the many authoritarian tactics being used by the Trump White House. We can prevail by insisting on the truth from our leaders and our media and by supporting organizations that promote fact-based journalism and the First Amendment.