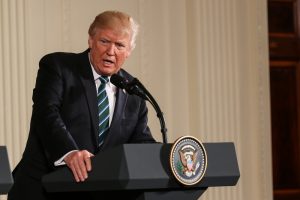 “America will lead again. We do not seek to impose our way of life on anyone, but we will champion the values without apology. We want strong alliances and partnerships based on cooperation and reciprocity. We will make new partnerships with those who share our goals, and make common interests into a common cause. We will not allow inflexible ideology to become an obsolete and obstacle to peace.”

US programs like the Marshall Plan helped rebuild Europe after World War II and create a more secure and prosperous world based on shared western values. Our partnerships and multi-lateral agreements did not happen by accident. They grew from a recognition that they were vital to prevent future world wars. But Trump made it chillingly clear that his “new partnerships” may include brutal dictatorships and former adversaries like Russia:

“As an example, yesterday I received a call from President Putin of Russia thanking our country for the intelligence that our CIA was able to provide them concerning a major terrorist attack planned in St. Petersburg, where many people, perhaps in the thousands, could have been killed.”

I’m happy we helped stop a terror attack, but I’m suspicious of this new alliance. A few days after this speech, Trump and his UN Secretary, Nikki Haley, threatened our traditional allies with retribution and punishment for failing to support US recognition of Jerusalem as the capital of Israel. This bullying new foreign policy does not bode well for a world based on global trade and shared prosperity. It envisions a future based only on rivalry and competition. It misunderstands the economics, values and military alliances that helped build a safer planet. It fails to understand that America’s leadership stemmed from our ability to be a leading example of truth, justice, freedom and innovation that inspired the rest of the world, not from being a bully who threatens its allies if they don’t do whatever we ask of them.