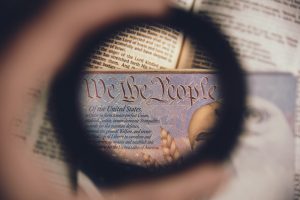 If you followed the stories about the Alabama senatorial election, in which Democrat Doug Jones barely squeaked out a win against opponent Roy Moore, you’ve probably read a lot about voter suppression tactics being used to discourage black voters from getting to the polls.

There was a lot of lip service paid by the (predominantly white) media about how black voters “saved” the country by ushering Jones into office—after all, black voters overwhelmingly voted for him. But if voter suppression were really a factor in this or any other election, would black voters have been able to turn out in numbers that allowed Jones a win?

Boston Globe columnist Jeff Jacoby says that, judging from black turnout in the Alabama election, voter suppression is a myth, and to claim that it is happening dishonors the black voters who fought very real historical efforts whites made to keep them from voting prior to the establishment of the Voting Rights Act.

Voter ID laws are a tactic most often decried by liberals as a tool for voter suppression. But what do the facts say?

In 2014, Jason Riley commented on Fox News’s “The Kelly File” that black voter turnout in 2012 exceeded the rate of white voter turnout, even in the states with the strictest voter ID laws. When Politifact, notorious for its liberal bias, checked Riley’s statement, they found it was true.

The nonpartisan Brennan Center for Justice says that, according to its research, race played a factor in states that passed new voting restrictions in response to demographic shifts including recent growth in population or voter turnout among minority voters. The center also argues that strict photo ID laws are on the rise, having rapidly increased in number between 2010 and 2016.

Ironically, it turns out that voters generally don’t have a problem with voter ID laws. A 2016 Gallup poll showed that 80 percent of respondents favored them. Gallup’s report admits that studies have shown voter ID laws reduce voting among blacks and young adults, who tend to vote Democratic. Nonetheless, 77 percent of nonwhite respondents said they favor a requirement that voters present a photo ID at the polls.

Like many things in politics, there are no simple answers. While tactics like gerrymandering clearly cause problems, not just for minority voters but for fair elections in general, the photo ID requirement enjoys favor among both white and nonwhite voters and does not appear to be causing decreased turnout by minority voters.