Who Commits Most Terror Attacks in the U.S.? 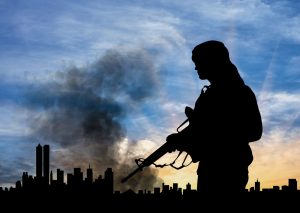 You might be surprised to find out that radical Muslims are not responsible for most of the terror attacks on domestic soil. Photo: Shutterstock

Since September 11, 2001, when the Twin Towers were felled in the largest terror attack on North American soil to date, many Americans have come to fear terrorists. And the boogeyman for most of those terror attacks happens to be radical Islamist extremists. But are most terrorist incidents conducted by these individuals?

Not according to the non-partisan General Accounting Office.

In a 2017 report cited by Senator Cory Booker (D-NJ) during hearings with Department of Homeland Security Secretary Kirstjen Nielsen, the GAO noted that since September 12, 2001, there have been 85 incidents of extremist terror attacks resulting in deaths in the U.S. Sixty-two of those attacks were perpetrated by white nationalist extremists, and 23 were perpetrated by Muslim extremists. That means 73 percent of fatal terrorist attacks in the last 16 years have been committed by white nationalists.

That doesn’t even count the vast and increasing number of non-fatal terror attacks including spray-painting swastikas on synagogues and anti-gay graffiti on the homes and vehicles of LGBT Americans, not to mention the white nationalist Unite the Right rally in August of 2017.

According to the Southern Poverty Law Center, there are currently 917 hate groups operating in the U.S.

So who are we fearing again?

Why is there such a disconnect between the myth and the facts? According to a March 2017 paper by researchers from Georgia State, it’s because of the media.

The researchers estimated news coverage from LexisNexis Academic and CNN.com for all terrorist attacks in the United States between 2011 and 2015. After they controlled for target type, fatalities, and being arrested, attacks by Muslim perpetrators got, on average, 449 percent more coverage than other attacks. “Given the disproportionate quantity of news coverage for these attacks, it is no wonder that people are afraid of the Muslim terrorist,” the researchers wrote. “More representative media coverage could help to bring public perception of terrorism in line with reality.”

Patrick G. Eddington, writing in the Libertarian Cato Institute’s blog, said, “That incident-media reporting disconnect is matched by another: the notion that Arab/Muslim-Americans are more susceptible to radicalization and thus to becoming terrorists.”

In fact, the radicalization process is similar across ideologies.

“The processes are pretty much the same,” said Mary Beth Altier, an expert on radicalization at New York University. “There aren’t really distinctions between joining a group like the KKK and ISIS.”

What enables radicalization? Personal issues including economic insecurity, loss of a loved one, exposure to violence, religious conversion, and a search for meaning in life. Social issues like war and insurgency, rapidly changing demographics, swift changes in civil society or civil rights, economic upheaval, and efforts to foment uncertainty by state actors also play a role.

“Many of these issues are present for some white Americans,” German Lopez wrote in Vox. “Manufacturing jobs are being shipped overseas. The opioid epidemic is killing family and friends, and addiction is on the rise. Meanwhile, demographic statistics show that white people will no longer be the majority in the U.S. in a few decades…[S]ocial media tools are giving white Americans an outlet to voice these concerns.”

Considering these issues, there is fertile ground for white radicalization in America. And extremist groups, like religious cults, take advantage of these issues to recruit people.

We need to take right-wing terrorism more seriously, and it needs to receive equal coverage in the media. “There’s an inherent bias in how we frame Islamist versus far right-wing, white supremacist terrorism,” Altier said, pointing to the Charlottesville car attacks as an example. “The guy ran people over with a car. If a Muslim deliberately ran people over with a car, immediately it would be a terrorist attack.”

You can see how true that is by considering the coverage of the 2017 terror attack in New York, when Sayfullo Habibullaevic Saipov allegedly drove down a bicycle path and killed at least eight people in the name of ISIS.

What it boils down to is that white nationalists commit far more acts of terror on American soil than do Islamist extremists. However, when terror attacks perpetrated by Muslim extremists receive so much more coverage than white nationalist attacks, it’s no wonder many Americans are scared of Muslims. It’s about time we focus on a real problem and get to the root of what is radicalizing white Americans so we can counteract those messages.