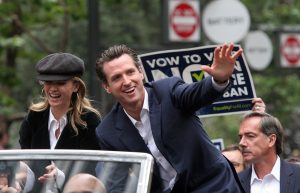 Lieutenant Governor of California Gavin Newsom has issued a stern warning to the Trump administration in a new video that he posted on Facebook.

“California will remain a sanctuary state, and your attempt to intimidate will not stop us,” Newsom captioned the video.

The video was in response to the Justice Department’s threat of lodging criminal charges against any local or state official who enforces sanctuary policies that protect undocumented immigrants. The move is part of President Trump’s ongoing commitment towards deporting illegal immigrants, whom he’s frequently referred to as criminals.

Is there some truth to this claim? Yes. According to ICE records obtained by the Center for Immigration Studies, sanctuary policies did cause the release of over 8,000 illegal immigrants with criminal records over an eight-month period. However, it’s also worth noting that crime rates in border communities and by immigrants, both legal and illegal, are lower than the rates for native populations.

In his online video, Newsom points out that even Rudy Giuliani—former Governor of New York and a well-respected figure in the Republican Party—supports sanctuary polices.

“America’s mayor himself [Giuliani]—the great defender of Donald Trump during his campaign—promot[es] that same policy, which exists in almost every major metro across the United States,” Newsom said.

Some immigration activists have gone so far as to question the legality of prosecuting politicians who protect sanctuary cities. Cecillia Wang, Deputy Legal Director for the American Civil Liberties Union (ACLU), worries that this measure could be a violation of the Tenth Amendment and the First Amendment if they go after officials who speak out against the administration’s policies.

“These are really troubling intimidation tactics by the Trump administration,” Wang told Newsweek. “If they’re threatening to prosecute state and local officials, it raises a number of concerns, including if they end up going after state or local officials who have been outspoken in opposing the Trump administration’s draconian and unlawful immigration enforcement policies. I think you’ve got a serious First Amendment problem.”

Newsom went even further by comparing Trump’s hardball tactics to that of a tyrant.

“Arresting people simply because they disagree with you is what dictators do,” Newsom wrote in the accompanying description of his video.

Californians in particular are taking a keen interest in the issue, since San Francisco is often seen as the most prominent sanctuary city in the U.S. But as Newsom points out, it would be against the GOP’s best interest to pursue the matter.

“You wanna go after one of the most vibrant metros in the United States of America, then you’re committing economic suicide.”