Are Sharia Law and No-Go Zones Coming to the U.S.? 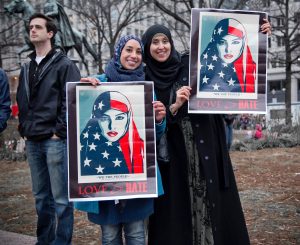 Sharia law has been a bogeyman since 9/11, frequently used as justification for anti-Muslim activities.

Any group of religious individuals—or any group of people, really—is going to have outliers who perpetuate violence. So it’s not surprising that many Americans have become extremely concerned about issues related to Islam and the people who practice it. In particular, there’s an increasing fear around Sharia law, Muslim-centric “no-go zones,” and the idea that the Islamic extremists are actively gathering to overthrow American democracy.

The problem is that there’s very little evidence to back that up.

There’s actually some precedent for the idea of the spread of Sharia law. Britain’s Muslim Arbitration Tribunals, for instance, allow Muslims to officially resolve conflicts outside the usual court system. And similar courts exist for Jewish individuals. However, nothing decided in these courts is passed unless it also follows British law. And in the U.S., the Supremacy Clause in the Constitution prevents any law, religious or otherwise, from becoming the law of the land if it does not follow U.S. federal law.

As for no-go zones, there are definitely pockets of particularly virulent violence in the US and across the world. These communities are often blamed (sometimes rightly) for acts of terrorism. Right after the 2015 Paris attacks, for example, police immediately headed to the Belgian community of Molenbeek, known as a run-down area with 30% unemployment and a reputation for unlawful activity. According to Brice De Ruyver, who spent eight years as advisor to then-Prime Minister Guy Verhofstadt, “We don’t officially have no-go zones in Brussels, but in reality, there are, and they are in Molenbeek.” Known to be a haven for jihadists, gangs, drugs, and general lawlessness, Molenbeek was also the hiding place of three of the alleged perpetrators of the Paris attacks.

So is terrorism and spread of Sharia law headed for the US? Depends on who you ask.

In January 2015, Louisiana Governor Bobby Jindal stated that Muslim terrorists and no-go zones were spreading across the U.S.:

In the West, non-assimilationist Muslims establish enclaves and carry out as much of Sharia law as they can without regard for the laws of the democratic countries which provided them a new home….

It is startling to think that any country would allow, even unofficially, for a so called “no-go zone.” The idea that a free country would allow for specific areas of its country to operate in an autonomous way that is not free and is in direct opposition to its laws is hard to fathom.

When asked to back up his claims, he was only able to reference The Daily Mail, a notoriously unreliable UK tabloid.

Meanwhile, the website Truth Uncensored has reported no-go zones in places like Dearborn, Michigan—with no source for their information. And the Conservative Tribune posted a map of where these no-go zones exist in the U.S. with little explanation for the data, except to cite Steve Emerson, a terrorism expert for Fox News who made and then retracted a statement about the existence of no-go zones in the U.S. (The page where the map originally was now goes to a 404 error.)

If there really are areas in the U.S. (or elsewhere) where terrorism is being nurtured and encouraged, then yes, we ought to be concerned. However, Muslims are only 1% of the U.S. population and their radicals and fundamentalists are not a systematic group wanting to enforce Sharia law. And even if they were a much larger force pushing for it, the Supremacy Clause makes it illegal.

Meanwhile no-go zones are often more about low-income, crime-ridden areas needing revitalization than groups plotting to destroy America. And building up our communities is a big enough challenge without adding unfounded fears.