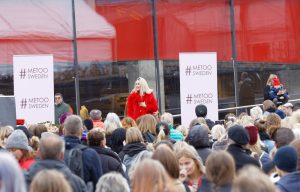 Over the last two months, three gang rapes took place in Malmö, the capitol city of Sweden. Street protests erupted, with activists criticizing the police’s response and demanding better accountability from elected officials. With a general election on the horizon, sexual violence toward women is set to become a key issue in Swedish politics, a topic closely tied to underlying fears about immigration in the country.

This time last year, Malmö entered the global political discussion when it was named the “rape capitol” of Europe by a conservative British politician Nigel Farage, who pointed to Sweden’s refugee amnesty policies as a leading cause for increased sexual assault numbers. Donald Trump echoed Farage’s views when he alluded to a Fox News exposé drawing connections between rape and Muslim immigration to Sweden.

With anxieties about recent influxes of Syrian refugees and reports of rape on the rise, Trump’s and Farage’s comments mirrored a sentiment already growing within Sweden, a political shift that can be seen in the emergence of the Sweden Democrats, a Swedish party that has risen in prominence by stoking anti-immigrant sentiments.

But correlation does not equal causation. Sweden does have a disproportionately high number of reported rapes, but due to the ways these statistics are reported, those numbers are misleading. In both 2005 and 2013, Sweden broadened its legal definition of rape to include violent acts that extend beyond standard definitions of rape in other European countries.

If anything, Sweden’s inflated numbers represent comprehensive reporting, not disproportionately high assault numbers. Despite the inflammatory rhetoric, there’s no factual evidence that shows rape is on the rise, or that immigrants disproportionately commit sexual crimes against non-immigrant communities. In fact, most reported sexual assaults are women who themselves are first- or second- generation immigrants.

The current series of gang rapes in Malmö don’t represent a significant rise in the frequency of sexual violence overall, but instead the frequency of a specific type of sexual violence—gang rape. The reason for this is still unknown, but we can reasonably say that it’s not due to immigration. Nonetheless, it’s likely we’ll continue to see Muslim immigrants scapegoated for these kinds of violent acts, even though the evidence doesn’t add up.