What Is An Honest Climate Change Debate? 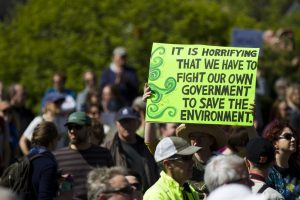 Scott Pruitt, head of the EPA appointed by Donald Trump, is calling for an “open, honest talk” about climate change, a topic that has traditionally divided Democrats and Republicans.

In the current polarized political landscape, it’s worth asking what exactly Mr. Pruitt means when he says “open” and “honest.” In his remarks, he suggested that the climate change debate should not be about whether the climate is actually changing, but how that change can realistically predict for the future and whether the prevailing scientific methods for climate measurement should be trusted.

Pruitt admits that the earth is in fact heating, but attempts to shift the discussion away from the impending danger such changes may present, instead suggesting that there may be no way to know for certain whether the global temperature will continue to rise to projected levels.

This is technically true—all scientific projections carry a measure of doubt—but exaggerating that doubt is a common tactic used by science deniers to sow skepticism among the populace. A small amount of uncertainty should not discredit the overwhelming evidence to the contrary.

The prevailing belief within the scientific community is that the earth is heating at a dangerous rate, largely due to human activity. Though Mr. Pruitt is questioning measurement methods for predicting climate change, we’re already finding that climate models have been accurately predicting the rate of ocean heat accumulation. Though we can never be completely certain what the future looks like, it would be unwise to ignore the data available to us.

Refusing to recognize climate change as an imminent threat because experts only have a “high level of certainty” instead of “absolute certainty” of its lasting impact is like refusing a completely safe, life-saving surgery because you’re pretty sure if you just pretend you’re not sick, you’ll get better.

How does Mr. Pruitt expect to have an open climate change debate when the scientific research is so heavily lopsided? There isn’t a significant debate within the scientific community, which suggests that Pruitt’s imagining of a broader debate would boil down to trying to discredit the experts who study the very topic, not asking objective questions and paying heed to the weight of these scientists’ experience and expertise.

In other words, if we are to have an informed public climate change debate, it would have to be based on objective evidence and be a conversation between experts. But it’s that very evidence that Pruitt is calling into question.

It’s a catch-22, and we as citizens would be remiss if we didn’t recognize the political convenience of the EPA Administrator’s approach. The stance serves to discredit climate change studies without having to directly confront the scientific evidence on the topic. By arguing for a “fair, open debate,” Pruitt is seeking to promote an ideology that distrusts science itself rather than one that objectively confronts real and pressing issues.