Does the News Media Really Have a Liberal Bias? 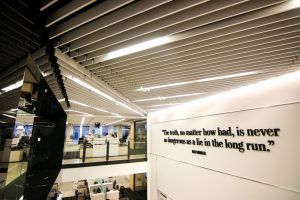 Although some believe in news media bias, it’s people’s perceptions that are biased. Photo by Nicole S Glass / Shutterstock.com

But is the reporting done by mainstream news media really tilted leftward? The answer may surprise you.

It’s true that the papers and networks of record are based in places like New York; Washington, D.C.; and the West Coast, areas that trend liberal in social and economic issues. It’s also true that the opinion columns in the United States’ traditional and digital media lean left—and sometimes strongly so.

However, journalists are trained to report in an objective way, no matter their personal opinions. And the economics of journalism incentivize reporters and their editors to report accurate news that is supported by credible sources. For example, after it was learned that Judith Miller at The New York Times falsified many of her reports about the evidence for invading Iraq, she was fired and her career in journalism mostly ended.

While the news media itself may not be biased, public perception of news media bias is very clear.

According to the Pew Research Center, public perception of the media’s role as well as its bias has shifted dramatically over the past year. For example, in 2016, more than seven in 10 Americans—both Democrats and Republicans—felt that the media played a crucial role in keeping politicians from doing things they shouldn’t. However, in 2017, 89 percent of Democrats and only 42 percent of Republicans believed the media played a watchdog role. This is the widest gap measured since Pew started monitoring this metric in 1985.

Another alarming fact from Pew’s research is that two-thirds of Americans report that they get at least some of their news from social media, which then creates an echo chamber that amplifies people’s own biases—and their perception of news media bias.

The University of Michigan Library published a research guide for students on how to sort fact from fiction, and how to discern news media bias. In it, they recommend that students refer to a website called AllSides, which uses a patented system of discerning the bias ratings of various news sources and allows people to submit their own ratings. According to AllSides, there are actually more outlets that are centrist or have a conservative bias than there are sources that have a liberal bias. The site has rated 137 news sources as either “roughly center” or “right leaning” and 103 as “left” or “left leaning.”*

If you truly want to avoid biased media, it’s crucial to read stories from sources with which you disagree as well as those that match your political views. In an age of increasing social media use and an increase in the number of online outlets whose authors may not abide by trained reporters’ guidelines about maintaining objectivity, it’s more important than ever to check your facts and read stories from diverse sources.

*02/19/18 – Edited to add additional clarifying sentence to the second-to-last paragraph regarding statistics cited from AllSides.