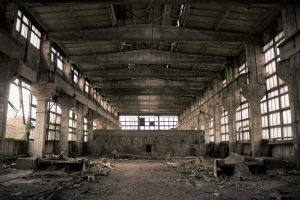 American workers are losing their jobs to robots, not immigrants. Photo: Shutterstock

There’s no doubt that the economy played a huge role in the 2016 election.

According to CNN, the U.S. has lost five million manufacturing jobs since 2000. During the campaign season, Donald Trump promised to bring those jobs back. When it came time for the election, Americans chose the candidate who they believed would put food on their table.

Indeed, the net number of jobs added/lost under Trump since February 2017 is 1.84 million. The median jobs growth of 208,000 per month is the highest since Bill Clinton, with many of the new jobs in manufacturing.

However, there are some lingering doubts about the long-term success of President Trump’s plan to bring more prosperity to the average American.

During the campaign season, Trump said that he would save jobs at Carrier, an Indiana-based heating and air conditioning company that threatened to move its plant to Mexico. Trump did manage to prevent Carrier from moving, but the company still laid off hundreds of employees.

“I don’t think he’s really going to come through, even though I hoped he would,” one laid-off worker said.

“He pulled a bait-and-switch on us,” another chimed in.

So why wasn’t Trump able to prevent these layoffs, even after the company kept its plant in the U.S.?

Throughout his campaign and presidency, Trump has pointed the finger at foreign workers and immigrants, particularly those from China and Mexico. But while outsourcing is an issue, it isn’t the entire problem—not even close.

There’s a big issue that isn’t being talked about as much in politics: increasing automation in the manufacturing industry. Americans aren’t losing their jobs to foreigners—they’re losing them to robots. And that’s not exactly a problem that has a quick fix.

Tech industry leaders have been talking about this issue for years. Elon Musk, co-founder and CEO of Tesla, says that technology is advancing to the point where robots are becoming more efficient than humans. And when that’s the case, many companies will choose automation—the more profitable option.

“There certainly will be job disruption. Because what’s going to happen is robots will be able to do everything better than us. … I mean all of us,” Musk said at the National Governors Association 2017 Summer Meeting.

“Our generation will have to deal with tens of millions of jobs replaced by automation like self-driving cars and trucks,” he said, further explaining, “When our parents graduated, purpose reliably came from your job, your church, your community. But today, technology and automation are eliminating many jobs. Membership in communities is declining. Many people feel disconnected and depressed, and are trying to fill a void.”

This type of cultural shift understandably makes people fearful about the future. That fear often translates to anger, as people seek someone or something to blame for their woes. As psychology professor Susan Krauss Whitbourne points out, “Blame is a tool we use when we’re in attack mode.”

And attack mode it has been, as Americans continue to use immigrants and foreign workers as scapegoats for the loss of domestic jobs. Unfortunately, much of that anger has been misdirected. Bringing jobs back to the U.S. isn’t as simple as keeping the factories here; more and more, it’s about figuring out how to deal with the disruption that automation brings to the job market.