Where to Draw the Line on Gun Control 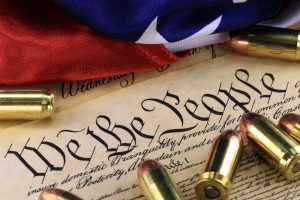 October 1, 2017 was a tragic day for Americans. It was the day that 64-year-old Stephen Paddock opened fire on a crowd of Las Vegas concertgoers—killing 58 people and wounding nearly 500 others. It set a record for deadliest mass shooting in modern U.S. history.

Predictably, it reignited a longstanding debate about gun control. It seemed that everyone, both Democrats and Republicans alike, wanted to know: How do we prevent this from happening again?

The answer isn’t as clear-cut as it appears. While some argue that the solution is to ban guns altogether, the fact is that the Second Amendment grants citizens the right to bear arms. It’s a right the Supreme Court affirmed in 2008 in the District of Columbia v. Heller case when it overturned a handgun ban in the city, justice Antonin Scalia explicitly affirming an individual’s right to keep a weapon at home for self-defense.

But even by this definition, the Second Amendment doesn’t necessarily grant the right to bear military-style assault weapons. The Bill of Rights was first adopted in 1791, long before the first military-grade assault rifle was invented (the StG 44 is considered the first mass-produced assault rifle; the German army adopted it in 1944). 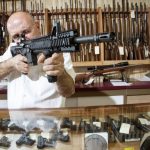 In 1986, the NRA heavily supported the Firearms Owners Protection Act in order to undo many of the rulings of the 1968 Gun Control Act.

The changes included: reforms intended to loosen restrictions on gun sales, the reopening of interstate sales of guns on a limited basis, legalization of ammunition shipments through the U.S. Postal Service, removal of the requirement for record keeping on sales of ammunition, and federal protection of transportation of firearms through states where possession of those firearms would otherwise be illegal.

However, as the bill was coming to a final vote, New Jersey Democrat William Hughes introduced an amendment that would make the sale of machine guns illegal after the law took effect. There were enough Democrats to pass the amendment, so no one objected when a voice vote was called for, rather than a roll call vote.

When we think about the Constitution in this context, we can then safely assume that the Founding Fathers didn’t have assault weapons in mind when they wrote the Second Amendment—because they simply didn’t exist. The world we are living in today is different than the world in which the Constitution was written, and that means it is now up to us as modern-day citizens to interpret whether or not semi-automatic weapons fall under this purview.

After the Civil War, militias were abolished in former Confederate states and the 1866 Civil Rights Act was passed to protect freed slaves’ right to bear arms. It wasn’t until a hundred years later, when the Black Panthers began conducting armed patrols in Oakland neighborhoods, that the issue of gun control became a public issue for Republican and Democrats alike.

So where does that leave us with assault weapons? Ownership of fully automatic weapons manufactured after 1986 is already restricted; any fully automatic machine guns that were made pre-1986 must be registered with the ATF and require citizens to undergo extensive background checks before they may legally own them. The National Firearms Act, or NFA, federally regulates all fully automatic weapons, suppressors, short-barreled rifles and shotguns, and destructive devices like grenades and bombs. Under the NFA, fully automatic weapons may only be purchased by qualified state and federal agencies—without exception.

What about machine guns made before 1986? Those can be obtained by private citizens, but there are an extensive list of hoops to jump through, a high price tag, and the process takes about a year. If an individual passes the background checks, they must register the gun federally with their information and a unique serial number for the weapon. Additionally, any time the individual moves or plans to travel outside of their state of residence, they are required to notify the Bureau of Alcohol, Tobacco, Firearms and Explosives (ATF).

Long story short? Any reporting that posits the ownership of machine guns as “perfectly legal” is highly misleading. Is it possible? Yes, but the image of any Joe Schmoe just sauntering into a gun shop and walking out that same day with a slew of machine guns is inaccurate to say the least.

Bump stocks are not banned under federal law, as they do not technically convert a rifle into a fully automatic firearm. In the Las Vegas shooting, this alteration allowed about 90 shots to go off in 10 seconds (compared to about 98 shots in 7 seconds for a fully automatic weapon).

The problem here is that if Paddock can do it, so can others. And so now we must charge the government with closing this loophole so that massacres like this don’t happen again.

According to the Constitution’s preamble, the government serves six main purposes:

That third point is particularly relevant to this discussion, as it clearly outlines the government’s role in insuring domestic tranquility. As it is now, semi-automatic weapons, specifically those altered with bump stocks, pose a huge threat to domestic security.

But the government is also responsible for securing the blessings of liberty. We must find a happy medium that protects citizens’ Second Amendment rights while at the same time ensuring the safety of our citizens.

In 2017 alone, there were 427 reported mass shootings in the U.S. Just this past week, 17 people were killed when a gunman opened fire inside of high school in Parkland, Florida.

This is horrifying proof that this a dire problem in need of a complex solution. The issue of gun control is not something that can be solved with emotional arguments, personal insults, and polarization—we must talk about this rationally, factually, and find a middle-ground solution. Our kids’, neighbors’, friends’, and family’s lives may very well depend on it.

What do you think the ideal amount of gun control to accomplish both of these goals is? What are some common-sense regulations that could offer a viable compromise?