You Can Officially Blame Global Climate Change for Some Natural Disasters 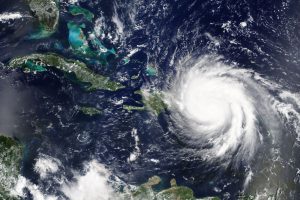 Recent developments in climate science have shown that some natural disasters could not have occurred without global climate change. Photo: Shutterstock

For many years, climate scientists were unable to make an exact connection between global climate change and local weather. After all, there are many factors that influence the weather, including natural climate variations. The most they could say was that climate change creates conditions that raise the probability of extreme weather events. A warmer climate holds more moisture, which can lead to more torrential downpours and the resultant flooding or mudslides, for example.

But now, climate science has advanced to the point where extreme events can be attributed to global climate change.

“This relatively new area of science—known as event attribution—is rapidly advancing,” writes the Committee on Extreme Weather Events and Climate Change Attribution at the National Academy of Science. “The advances have come about for two main reasons: one, the understanding of climate and weather mechanisms that produce extreme events is improving, and two, rapid progress is being made in the methods that are used for event attribution.”

However, what event attribution does allow scientists to do is to investigate and determine the extent to which global climate change has influenced a natural disaster. This is done with the help of climate models—computerized simulations that compare events with and without the assumption of climate change. Researchers then compare the outcomes and can study the connection between global climate change and individual natural disasters like hurricanes, floods, and wildfires.

It’s only in the last couple of years that researchers have begun saying that some extreme weather events like the Russian heat wave of 2010 (which contributed to the deaths of more than 50,000 people), record-breaking temperatures in 2016, and the California drought could not have occurred without climate change.

“Every time we have a high-impact, catastrophic, perhaps extreme event happening, people are invariably asking the question, ‘Is this climate change?’” Nikos Christidis of the UK Met (meteorological) Office told Scientific American. “The whole science of event attribution developed so that we can provide scientifically robust answers to these questions.”

So, can we blame individual natural disasters on global climate change? We can say with a high degree of confidence that climate change influences the severity and duration of extreme weather events, and that some events couldn’t have happened without it. However, even events that wouldn’t be possible without warming are still influenced by the earth’s natural climate and weather systems.

That said, what the new research does reveal is that the planet has reached a point where climate change is not just a factor in extreme weather events, but an essential component for some.