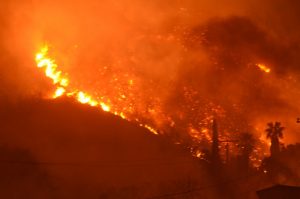 The 2017 Thomas fire was influenced by global warming. Photo: Shutterstock

Global warming and climate change are big, abstract, politically loaded topics. It’s sometimes hard to distill the conversation down and understand how it directly affects families and communities. Or at least it used to be. Unfortunately, the effects of global climate change are becoming more and more palpable. As the climate changes at an exponential rate, the old predictions and warnings are gradually beginning to be felt in very real ways.

A common misperception around climate change is that the only metric for global warming is hotter weather. In reality, the dangers to local communities often have more to do with the extreme weather conditions that global temperature changes create, and that doesn’t always mean hotter weather. It does mean more devastating hurricanes, extreme snowstorms, rising sea levels, and forest fires.

So let’s talk about what’s happening here at home in the United States. In southern California, a record setting fire tore through the southern part of the state only a few months ago. Unusually extreme contrasts between dry drought years and wet years have led to heightened fire risk conditions. These changes have been exacerbated by man-made climate change, and it resulted in the Thomas Fire—the largest wildfire in California’s history. What’s more, the fire began in December, in what should have been the cooler offseason.

To say that this kind of occurrence is “normal” is to willfully ignore the overwhelming evidence that climate change is a real problem, especially in the context of more extreme hurricanes and snowstorms on the East Coast, and rising sea levels worldwide. In the case of Thomas, we see how climate change is directly hurting the U.S. economy, families, and business owners. The disaster destroyed more than a thousand buildings, costing taxpayers at least $110 million and covering an area larger than New York City, San Francisco, and Washington D.C. combined.

On a large-scale level that we notice less in our daily lives, global warming has caused glaciers to shrink, ice on rivers and lakes to break up earlier, the melting of sea ice, accelerated rise of sea levels, longer and more intense heat waves, the shift of animal and plant ranges, and even earlier flowering seasons for trees.

If global temperatures continue to rise, as the vast majority of scientists predict, things will only get worse. Here’s how global climate change is expected to impact the U.S. by region:

How is it that climate change is still a partisan issue? These kinds of disasters hurt all Americans, and they don’t discriminate based on party. It would seem as though climate change issues might provide an opportunity for U.S. political parties to come together to protect American lives, industry, and property. It wouldn’t be the first time in history that environmental protection was considered a nonpartisan issue. After all, it was Richard Nixon’s administration that started the EPA.

What will it take to get U.S. politicians to work together, and is it possible in an America so divided? Our legislators can do better, but that won’t happen unless citizens take global warming and climate change seriously enough to put pressure on them.