Illegal Immigration Is a False Flag 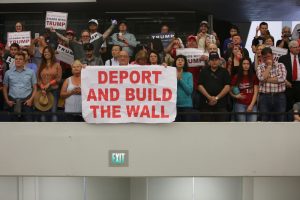 Is tough talk around immigration a false flag? Photo by mikeledray / Shutterstock.com

Immigration is a huge part of the current political discussion in the US. Democrats in Congress are demanding to extend DACA, but President Trump’s rhetoric around immigration focuses on keeping immigrants out through travel bans and wall building. The conversation is polarized and polarizing. Why is it playing out this way?

The travel ban seems arbitrary and political – implementing the program seemed to do more to stoke controversy than solve complex international relations issues, and it reignited hot-button controversy around sanctuary cities and states. DACA seems like the perfect bipartisan program. It was developed under the Obama, who was known for being tough on immigration.

DACA, in a way, can be seen as a way for Obama to meet immigrant advocacy groups in the middle. Though Obama was known as the “deporter-in-chief,” he made a point to make exceptions for undocumented immigrants who were brought to the U.S. as children. If Republicans were to vocally support the program, it would do a lot to bring immigrant populations into the party without caving on tough-on-deportation talk.

The United States signed a contract of sorts with DREAMers when DACA was enacted under the Obama presidency. Whether or not this is a program we choose to continue, the U.S. should keep its word to DREAMers and make an exception for those who were already told they would be protected under DACA.

It seems as though there would be a lot of room for compromise, but the White House continues to pursue a hostile policy toward immigrants. So, what is the story behind the conversation?

The truth is that the immigration issue for Trump may be less about policy and more about creating a rallying call to his base; but, it’s a false flag based on myths and lies that illegal immigrants are an invading force of criminals and welfare recipients.

The Republican base is angry after eight years of Obama. They feel disenfranchised and silenced. That anger has to be directed somewhere, and Trump is providing the perfect scapegoat.

When it comes down to it, it’s not about policy; it’s about making Trump’s followers feel empowered and heard. If the left is going to engage the right on immigration issues, they need to come to the conversation with this in mind, or it may be very hard to achieve progress.