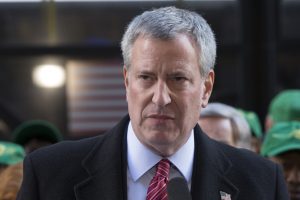 New York City is suing big oil for causing climate change. You read that right. This marks a new milestone in environmental history—there is now precedent for major American cities to take legal action against large corporations for damaging the health of the Earth and the well-being of its inhabitants, charging that these companies (allegedly) had full knowledge of the consequences and dangers of their actions and instead chose to act negligently.

Will NYC win the lawsuit or is this more about making a statement? Either way, it’s headline-worthy. Mayor Bill de Blasio’s move was a bold one, taking five oil giants to task and demanding that Chevron, BP, Conoco Phillips, ExxonMobil, and Royal Dutch Shell pay damages. The five companies combined have produced 11 percent of greenhouse gas emissions in the US since the Industrial Revolution—and as a result, have contributed significantly to issues related to man-made global warming.

The city is arguing that it’s entitled to damages to help mitigate the costs of coastal protections, water, and sewage upgrades, claiming that the oil companies “misled the public to protect their profits.”

The implications of this could be huge if the city wins the suit. Essentially, it would mean that these big corporate entities could be held responsible for the damages incurred during disasters caused or worsened by man-made global warming like Hurricane Sandy. It might sound extreme, but these charges didn’t come from thin air.

San Francisco and Oakland brought a lawsuit against the same five companies in September—the addition of New York represents not just a bold move, but also a growing trend among municipal leadership in major coastal cities affected by climate change.

These lawsuits aren’t the first of their kind. So far, lawsuits brought against fossil fuel companies haven’t been successful, but they also aren’t unheard of. As high profile climate change-related disasters continue to plague the U.S., we may see more of these kinds of aggressive tactics being used to fight back against fossil fuel organizations. And lawsuits aren’t the only tool governments can use; in addition to filing suit, Mayor de Blasio announced the city would be divesting its pension funds from fuel companies, a move worth more than $185 billion.

Though it wouldn’t do a whole lot to fix the damage that’s been done already, hopefully these efforts will make big businesses think twice before making decisions that may negatively affect the climate and the well-being of American citizens.