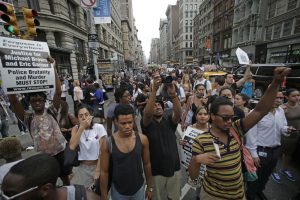 The Black Lives Matter movement is an extension of the civil rights movement of the 1960s, but unfortunately, many people today see it as nothing more than an excuse for a bunch of violent thugs to raise hell. Where did this difference in public perception come from? Public perception has been heavily colored by media coverage and by politicians’ public responses.

It’s tempting to respond with a knee-jerk reaction when we talk about charged topics like this, but we implore you to read on with an open mind if for no other reason than to gain a better understanding the Black Lives Matter (BLM) Movement and racial tensions in our country today.

A Little History on the Black Lives Matter Movement

In 2013, a Peruvian-American man named George Zimmerman shot and killed African-American teenager Trayvon Martin. After sixteen months, Zimmerman was found not guilty of second-degree murder and acquitted of manslaughter, the jury ruling that his actions fell under Florida’s expansive self-defense laws. In the end, a lack of clear evidence and eyewitnesses ultimately prevented the jury from being convinced beyond a reasonable doubt of his guilt.

Shortly after the acquittal, the hashtag #BlackLivesMatter showed up on Facebook, thanks to the efforts of Alicia Garza, who would go on to become one of the founders of the Black Lives Matter organization. On July 13 of the same year, #BlackLivesMatter first appeared on Twitter.

But the BLM movement didn’t really take hold until a year later—when, in Ferguson, Missouri, 18-year-old Michael Brown, an unarmed black man, was shot and killed by Darren Wilson, a white police officer. Protests erupted in Ferguson after an investigation from the Justice Department successfully defended Wilson’s actions despite some eyewitness testimony that Brown had tried to flee and then surrender before being shot. The #BlackLivesMatter hashtag trended on Twitter, becoming the third most-tweeted hashtag in Twitter’s 10-year history.

Also in 2014, another African-American, New Yorker Eric Garner, was arrested for allegedly selling single cigarettes from packs without tax. During the arrest, a white New York City police officer, Daniel Pantaleo, put Garner in a chokehold, a tactic banned by the NYPD. The city’s Medical Examiner’s Office ruled it a homicide, stating the chokehold directly caused Garner’s death. Further, video taken by bystanders showed Garner repeatedly saying he could not breathe.

Pantaleo had previously been sued three times under accusations of unlawful racially motivated arrests. One case was dismissed, while the other two were settled by the city. In Garner’s case, the city also settled, agreeing to pay the Garner family $5.9 million.

Protests once again erupted, and once again the #BlackLivesMatter hashtag trended.

Why “All Lives Matter” Is Problematic

“I think they should change their name, maybe—if they were ‘All Lives Matter’ or ‘Innocent Lives Matter,” Paul said. “I am about justice, and frankly I think a lot of poor people in our country, and many African-Americans, are trapped in this war on drugs, and I want to change it. But commandeering the microphone and bullying people and pushing people out of the way I think really isn’t a way to get their message across.”

On the surface, Paul’s comments may seem to make sense – of course all lives matter, not just black lives. But the use of this phrase as a replacement for “black lives matter” has caused significant controversy and backlash. Why? Those who use it often appear to be acting with good intentions, but the phrase is harmful because it removes the focus from a specific set of grievances against black Americans. The thing that is so often missed is that there is an implicit “too” for #BlackLivesMatter. The movement is not saying that only black lives matter; it’s saying that they matter, too—but in our current society, they are consistently treated as though they are lesser.

This comic by artist Kris Straub may be the best analogy to explain the problematic nature of the oppositional “All Lives Matter” movement. If one house is on fire and another isn’t, it just makes sense to give more attention to the one about to burn down.

In one comment, Paul summarized all the negative stereotypes that African-Americans have had to endure for centuries, demeaning the entire Black Lives Matter movement as just another excuse to riot and “bully” people.

Let’s be clear here: there definitely were riots in response to the deaths of Brown and Garner. But those riots were given a disproportionate amount of coverage compared to all the other nonviolent methods Black Lives Matter was using to improve the lives of African-Americans. These efforts included boycotts, meetings with politicians, national conferences, peaceful protests, and the creation of local chapters of the movement.

And in cases like the tragic events in Dallas of July 2016, when a black gunman killed five police officers, Black Lives Matter issued a public statement that decried the gunman’s actions. The gunman himself also stated that he acted alone and was not affiliated with any organization. And yet, blame for his actions continues to be firmly placed on the shoulders of BLM.

This method of validation is the same that is used to place the blame for the actions of radicalized Islamic terrorists on the Muslim community as a whole. It seems easy, simple, black and white. But using that same validation, does that mean we should start blaming all Christians for the hateful rhetoric and actions of extreme groups like the Westboro Baptist church? Should we hold all Catholics accountable for the child abuse committed by Vatican clergy over the years? Should we blame the pro-life movement for James Kopp’s killing of an abortion provider?

Of course not. That’s why we must strongly speak out against these atrocities when they happen and, more importantly, take action that will create change. And that is what the Black Lives Matter movement is all about.

The Media Is Part of the Problem

The media—particularly Fox News—have portrayed the Black Lives Matter protestors as “wild animals” and “thugs.” But when white people rioted in response to losing (or winning) a big sports game, they were just “a little out of control” or the riots were justified by banal terms like “it’s tough to lose.” When the police showed up at Black Lives Matter rallies, they were in full riot gear and accused of “standing around doing nothing.” On the flip side, in most cases where white people rioted, police came dressed in regular attire and appeared to simply be monitoring the situation passively.

As Abby Caldara points out in this Odyssey article, the coverage of protests is disproportionately biased against black people. She points to the example of the 2015 Waco riot and shootout between two biker gangs, which was predominantly white and netted 170 arrests and nine deaths but was still not referred to as a riot. “Meanwhile in the Baltimore [student protest that happened the same year],” she writes, “there were zero dead and it was referred to as a ‘riot’ and the people involved were ‘thugs.’”

In the time since the Ferguson unrest, Black Lives Matter has coalesced into a global network whose mission is to “build local power and to intervene in violence inflicted on Black communities by the state and vigilantes” and to “move beyond the narrow nationalism that is all too prevalent in Black communities.”

That is, the movement’s goal is to make it known that black lives matter—all black lives, regardless of sexual orientation, gender identity, sex, disability, immigration status, or folks with records, matter.

Is this a bunch of “wild animals” or “thugs?” No. I’d argue that the Black Lives Matter movement is carrying the torch of their forefathers and foremothers in the civil rights movement, regardless of what the media would have us believe.

As The New York Times editorial board wrote, “Demonstrators who chant the phrase [Black Lives Matter] are making the same declaration that voting rights and civil rights activists made half a century ago. They are not asserting that black lives are more precious than white lives. They are underlining an indisputable fact—that the lives of black citizens in this country historically have not mattered, and have been discounted and devalued.”

As in all matters of civics and political affairs, it’s crucial to step back from the 24-hour news cycle and its inflammatory rhetoric, read information from a variety of sources, and understand the context within which these movements occur. Only then can we separate fact from fiction and get to the heart of the issue.

In this case, the issue is that a series of high-profile murders of black men by vigilantes and police officers, almost always white, have proven that despite all the gains made by African Americans through the civil rights movement, black lives are still seen as worth less than white lives, on both a conscious and subconscious level. And that’s why the Black Lives Matter movement really does matter: it’s bringing the topic of racism in the 21st century to the forefront, forcing us to confront it and hopefully change our ways.