The False Choice: Socialism vs. Capitalism 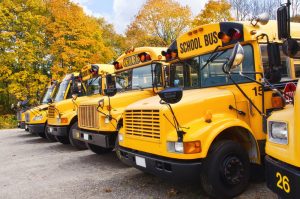 Free public schools are an example of a way we mix capitalism and socialism in the U.S. Photo: Shutterstock

The problem with the notion of “socialism vs. capitalism” is that it assumes that the two systems are incompatible. That you must choose between one or the other.

That is a false choice. Just look at the past 120 years of U.S. history, and European history since 1945. Most European countries provide quality, public education and health care (national systems), but everything else is private enterprise.

In the U.S. Constitution, we have the Commerce Clause giving the Federal government the power to regulate trade. The question has always been and should be, “What kind of regulation? And, how much regulation?” The question isn’t, “Should there be regulation or not?” because the Constitution already answers that question for us.

Since Teddy Roosevelt and the U.S. Progressive Era, we have gradually introduced measures of socialism to temper the excesses of capitalism, and we always did it without becoming totalitarian. That is the American way.

Socialism is at its core the use of collective taxpayer funds to pay for things that benefit society as a whole. It functions within a capitalistic economy (unlike communism, which seeks to completely eradicate capitalism. No, the two are not the same). Where can you see socialism at work in the U.S.? Look at any program or service funded by taxpayer dollars. For example, the U.S. Military and defense funding, highways and roads, public libraries, police, fire departments, postal service, student loans and grants, bridges, garbage collection, public landfills, Social Security, public schools, and so on.

The real question should be: “How much socialism?” From 1932 to 1981, we had a New Deal economy, which was all about creating a hybrid of capitalism and socialism, and we grew the economy for all classes. We had capitalism that worked for everyone.

Since the Reagan Revolution, which replaced the New Deal with decreasing regulation, less progressive taxes, and much less public investment in education, healthcare and infrastructure, we have had an economy that has stalled or gotten worse for the average American and created exponentially more wealth for a very tiny few.

So, why not make a national healthcare system and a free or cheap public education system to help create equal opportunity? And we’d still keep all our other systems private and continue to keep in place incentives that allow even better outcomes for people who work harder and smarter.