Are Rocket Launchers Protected by the Second Amendment? 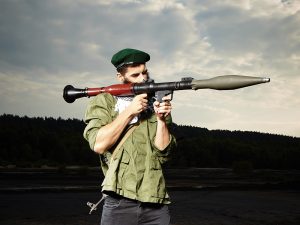 What would the Supreme Court do if they had to determine whether or not rocket launchers are legal for ordinary citizens to own? Photo: Shutterstock

Gun rights advocates like to claim that the primary reason for the Second Amendment is to fight against tyranny. Given that mandate, they like to point to a video of Antonin Scalia musing about whether or not hand-held rocket launchers might become a weapon put up for debate in front of the Supreme Court. He notes that such a weapon is at the upper limit of arms protected by the Second Amendment, because the text reads “keep and bear arms,” thus it only applies to weapons you can carry.

Certainly, a shoulder-launched grenade might help fight off an assault by a tyrannical president against true patriots. While neither the Constitution nor the Second Amendment state that it is a purpose of the right to bear arms, Hamilton and Madison each wrote in the Federalist Papers about the role of the Militia in fighting against tyranny.

Like the Militia that is described in Article 1, Section 8 of the Constitution, the militias were to have their officers appointed by the states, not the federal government. That way, these organized militias controlled at the state level would have enough reserves that they could organize against a standing Union Army (also comprised of state militias) if they would happen to come under the control of a tyrant.

So, it is very clearly the purpose of the militia, to have this dual mandate to help put down insurrections and defend the nation against foreign invaders, but also to become a defense against a tyrannical standing army. Please note the last sentence of this passage by Hamilton from Federalist 29 that shows the dual mandate—he is writing about the militia here:

“[I]f circumstances should at any time oblige the government to form an army of any magnitude that army can never be formidable to the liberties of the people while there is a large body of citizens, little, if at all, inferior to them in discipline and the use of arms, who stand ready to defend their own rights and those of their fellow-citizens. This appears to me the only substitute that can be devised for a standing army, and the best possible security against it, if it should exist.”

So, the militia in 1,8 of the Constitution is mainly about putting down the insurrection of groups outside of the militia system and defending against foreign invasion. Secondarily, the militia is intended to defend a state against a standing union army. So, all the current-day “patriot militias” are outside of this system. If they take up arms against the government, they will be fighting against the National Guard, which is the inheritor of the militia system (per the Militia Act of 1903), and they would have a fight with their little guns against all our tanks, jets, nukes, and missiles. Game over. If Trump tried to steer the Army against California, for example, the state’s National Guard, not a bunch of Oath Keepers in Jeeps, would be commanded by the Governor to fight them off.

Hamilton makes it clear at the beginning of Federalist 28 that the militia, formed by free men who have a right to bear arms, is intended to kick the ass of rebels running around in the woods, like they did to Shay’s rebellion:

“If, on the contrary, the insurrection should pervade a whole State, or a principal part of it, the employment of a different kind of force might become unavoidable. It appears that Massachusetts found it necessary to raise troops for repressing the disorders within that State; that Pennsylvania, from the mere apprehension of commotions among a part of her citizens, has thought proper to have recourse to the same measure.”

If the Supreme Court does its job right and ever does hear a case like the one Scalia talked about in the YouTube video, they’ll say “yes” you can have hand-held rocket-launchers to fight the Federal Government—as long as you use it as a member of your state’s National Guard.

This point of view is further supported by Scalia. In his majority decision in the Supreme Court’s 2008 Heller case, Scalia wrote:

“Like most rights, the Second Amendment right is not unlimited. It is not a right to keep and carry any weapon whatsoever in any manner whatsoever and for whatever purpose.”

“There seems to us no doubt, on the basis of both text and history, that the Second Amendment conferred an individual right to keep and bear arms. Of course the right was not unlimited, just as the First Amendment ’s right of free speech was not”