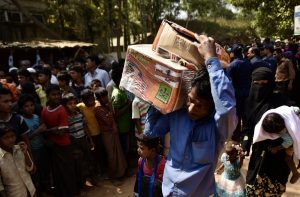 Do you want to end foreign aid spending? Do you think that money might be better spent on American soil?

What if you thought about the foreign aid budget differently—less as giving American dollars away and more as intrinsically important to U.S. national security? If we want to beat groups like ISIS for good, America can’t just be known for military might. We have to show that America truly is great, and that means promoting peace and stability around the world is in our interest.

Despite the foreign aid budget comprising less than one percent of the federal budget, President Trump has been calling for an end to foreign aid spending. On its surface, this aligns with his “America First” policy. But when you look at the fine print, it ignores the fact that foreign aid is a political tool to help promote American interests abroad.

People often forget that programs like the Peace Corps were largely founded with the goal of fighting global communism during the Cold War. Now, we fight terrorism and despotism rather than the Soviet Union, and America needs to use every tool available if it’s going to win the culture war abroad. Cutting foreign aid shows callousness and selfishness, and if the U.S. takes this approach it makes us less safe, not more.

Palestine is a prime example of how cutting foreign aid funds might damage our strategic positioning. Withdrawing humanitarian assistance for refugees in the region would only serve to push families toward groups like Hamas for survival, groups that vocally and militantly opposes the United States. If we look at it this way, withdrawing aid makes it easier for the enemies of America to recruit militants and hurts the U.S. in the long run.

And “the long run” is what’s important when we talk about foreign aid. Sustained support abroad makes U.S. diplomatic efforts easier over time, so when urgent international challenges do arise, supported countries are more likely to act according to US interests.

Think about it from a human level: Imagine you have just lost your job or are going through a divorce. Who are you more likely to turn to for help—the “friend” who has told you to suck it up and figure out your own problems or the friend who is standing by, ready to help you get back on your feet? And down the road, who are you, in turn, more likely to support—the one who helped you or the one who turned away?

Distributing aid abroad also carries with it practical economic benefits. In 2015, American businesses sold 51 percent of their products to developing countries—which helps support the creation of more jobs for Americans.

To cut the foreign aid budget would do little to promote American interests. In fact, removing the small amount of aid we do provide abroad may do more to hurt our economy and promote international terrorism than it would to protect Americans or help our economy.