The Language of Climate Change Deniers 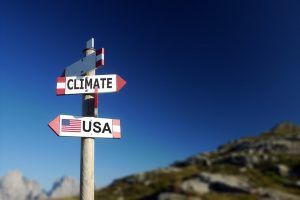 Whether or not climate change deniers believe it, cimate change is a real threat with real consequences. Photo: Shutterstock

President Trump has said explicitly that he believes the science behind climate change is a hoax. He has pointed to scientific terminology as evidence, arguing that when scientists use the term “climate change” instead of “global warming,” it means scientists can’t prove the globe was heating up.

Statements like President Trump’s are classic examples of tactics climate change deniers use to take advantage of the precise, measured language that scientists use. In the case of Trump, he’s technically right to say that global warming shouldn’t always be used to describe weather patterns on the ground. In fact, that’s exactly why scientists use “climate change” to describe the effects of “global warming.” But to say that using the term “climate change” disproves global warming is a logical fallacy that cashes in on the natural ambiguities of language.

It’s important to understand that global warming doesn’t necessarily create hotter weather in all locations all the time; however, it does create more extreme weather. That can mean more extreme snowstorms in one location, droughts in another, and floods due to melting icecaps in yet another. Climate change more accurately describes how communities are affected by the overall rising of global temperatures, whether or not it happens to be hotter in a particular neighborhood on a particular day.

Another example of the ways in which climate change deniers misrepresent science by twisting language has to do with margins of error. The argument goes that because there can be no scientific certainty in predictions, there can be no certainty at all about climate change. This is, again, a logical fallacy called “burden of proof.” This tactic is currently used by Trump’s head of the EPA Scott Pruitt to stall action that might curb climate change.

He argues that we need to measure human impact on climate change with more “precision” despite the fact that all evidence points to climate change as dangerous and caused by humans. Nonetheless, people like Pruitt can continue making the argument that there isn’t enough certainty as long as they want—there will always be room for more “precision” as long as Pruitt wants to stall.

But there is hope. On a national level, we may not be as divided as we think, and there may be fewer climate change deniers than we think. A Cornell study found that 85.8 percent of Americans across party lines believe climate change exists, and the partisan gap shrinks by about 30 percent when survey questions were framed favoring the term “climate change” over “global warming.”