Gun Rights: Before and After Heller 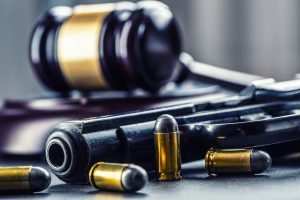 Before District of Columbia vs. Heller, there was United States vs. Miller.

The gun rights debate is in full swing right now as forces on the left push to regulate guns, and folks on the right try to stick to theirs (pun intended). In this hyper polarized media environment, it’s easy to forget what the debate has looked like in years past, but context is always important.

The U.S. Constitution set up a system of laws that’s subject to change based on how representatives legislate and how the courts interpret the bills passed into law. It’s one of the foundations of how the Constitution balances power between government bodies. This system is anything but static, and no one should assume that the Second Amendment was always seen the same way by the courts or our nation’s legislators. As such, it’s worth our time to take a look back at past Supreme Court cases that have helped to mold the current debate. 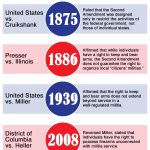 1868 – Presser vs. Illinois: Post-Civil War decision establishing that while individuals have a right to bear arms to ultimately be called upon as an organized militia, the Second Amendment does not guarantee the right to organize localized independent military organizations, drilling and parading.

1939 – United States vs. Miller: Affirmed that the right to bear arms did not extend beyond service to a well-regulated militia.

2008 – District of Columbia vs. Heller: Established the right of individuals to poses firearms unconnected to militia service, reversing precedents set by Miller

2010 – McDonald vs. City of Chicago: Extended Heller decision to state and local governments, in addition to federal regulations outlined in Heller

2016 – Caetano v. Massachusetts: Extended definition of second amendment protections for all bearable arms, even those that were not in existence at the time of the founding. The case referred specifically to a stun gun used for self-defense after a woman was arrested on the basis that the weapon did not carry with it Second Amendment protections.

One of the best known and more recent high-profile cases is the District of Columbia v. Heller, 554 U.S. 570 (2008). The case represented a drastic departure from past interpretations of Second Amendment rights. Prior to the ruling, civilian-owned guns were required to be stored disassembled and unloaded or bound by a locking device. It was the first time in 70 years that the Supreme Court reexamined whether the Second Amendment protects an individual’s right to carry a gun for self-protection purposes or only as it pertains to servicing a state militia. The court ultimately struck down both Washington, D.C.’s longstanding ban on handgun possession and the safe storage law, which contained no exceptions for self-defense.

The decision represented a huge departure from precedent. In the 1939 case, United States vs. Miller, the court stated in a unanimous decision that the “obvious purpose” of the Second Amendment was to “assure the continuation and render possible the effectiveness of” the state militia and that it “must be interpreted and applied with that end in view.” In reversing this precedent in the Heller case, the 2008 Supreme Court justices drastically changed how American citizens interact with guns.

But that doesn’t mean the Heller decision didn’t also acknowledge restrictions. In its deciding statement, the Supreme Court specified that the Second Amendment should not be seen to confer a “right to keep and carry any weapon whatsoever in any manner whatsoever and for whatever purpose.” It also stated that regulations on guns that prevent felons or the mentally ill from obtaining weapons, restrict gun possession in sensitive places like schools and government buildings, and impose conditions on commercial gun purchases are “presumptively lawful.” The court also said that this list was not exhaustive, and that the Second Amendment doesn’t necessarily prevent laws banning “dangerous and unusual weapons” that might apply to military-grade weapons like M-16s.