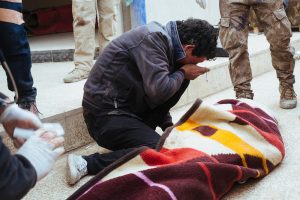 Atrocity propaganda is used to dehumanize the “other side.” Photo by cosimoattanasio – Redline / Shutterstock.com

According to the British Library, Atrocity Propaganda is “the spreading of information about the crimes committed by an enemy, especially deliberate fabrications or exaggerations. It is a form of psychological warfare.”

Nearly all combatants since the beginning of time have used this technique to some extent. In recent history, American enemies have been “Japs,” “Gooks,” “Commies” or “towel heads” —nicknames that leverage atrocity propaganda used to spread news of very real crimes committed by our enemies of the last century. This type of dehumanization is essential to gird combatants for battle because it stereotypes one group of people, focuses anger, and creates a very black and white picture of who the ”enemy” is.

But, lately, atrocity propaganda seems to be working its way into U.S. political discourse to describe our fellow Americans. On the Right, Tea Partiers and Trump supporters often paint all liberals as Commies or violent “antifa” who threaten their God-given rights. On the Left, liberals often paint all Trump supporters as “racists” or “deplorables,” as Hillary Clinton famously said on the campaign trail. 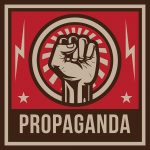 Atrocity propaganda was heavily utilized during World War I to legitimize German barbarism by focusing on the most violent acts committed by German and Austro-Hungarian armies. Official government reports took an objective voice but stacked evidence and eyewitness accounts in such a way that they were extremely compelling and convincing.

This is very dangerous. Such language dehumanizes our fellow Americans by characterizing them as armed robbers doing a tyrant’s bidding—that type of argument is a pre-condition for war and does not follow the Constitution they claim to love so much.

Libertarians making that declaration are saying that all social programs, validated as Constitutional by the Supreme Court, are actually a violent usurpation of rights created by a ”liberal court.”

It’s fine to disagree with public services and social spending, but the way to change that is by winning the argument legislatively, not by attacking your fellow Americans as armed robbers. That argument is only a justification for civil war, nothing else.

On the Left, liberal commentators in political forums online often write things like:

“Trump has opened the Pandora’s Box of racism and misogyny in America and normalized hatred and classlessness. Racists and Neo-Nazis have found their hero in Trump. He reflects their anti-Democratic views.”

But, this type of language is no better for a healthy democratic republic than the atrocity propaganda about liberals being Commies and violent “open border” Marxists.

While it’s true that there are some racists on the Right and there are also some Communists on the Left, these people are not the norm for either side of the aisle. In this video, a police chief in Oregon who voted for Trump is a good example:

Most Americans are tolerant moderates, not extremists. Overall, we lean to the Left on most issues, but the Americans who vote the most lean to the Right. So, we’ve ended up with a situation where the minority party now rules most statehouses and Governorships and controls all three branches of the federal government.

Walt Whitman wrote about the need for a national epic, for a “common sense of mystical purpose” that is required for our nation to flourish. Since the Cold War ended, we have failed as a nation to find our unifying North Star, our victory over Fascism, our Man on the Moon, our Civil Rights movement, our victory over Communism. To heal the wounds of our nation, we must find it.