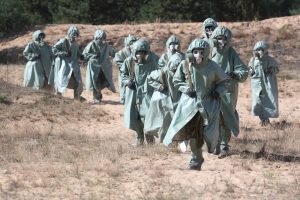 Hurricanes, extreme forest fires, and rising sea levels are all being attributed to human-made climate change, and the scientific consensus is that the extreme weather caused by global warming is a real and pressing threat.

As the problem worsens around the globe, we will likely also see other consequences of global climate change. As an example, population displacement and war caused by water scarcity and draught are commonly pointed to as likely future scenarios, but what other unforeseen troubles might arise as our environments rapidly change?

In the U.S., toxic sites are becoming a concern. In January, a top EPA official pointed to a program responsible for cleaning up toxic sites around the nation. EPA Principal Deputy Assistant Administrator Barry Breen reported to a Congressional House oversight subcommittee that the government must plan ahead to prevent threats to Superfund sites put in danger by the effects of climate change.

Civics Lesson: What Is the Superfund? 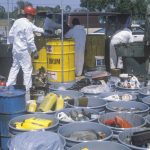 “Superfund” is a federal government program to fund the cleanup of polluted and hazardous sites. The program was established under the 1980 Comprehensive Environmental Response Act, authorizing the EPA, the states, and Native American Tribes to recover natural resource damage. The law also stipulated that those who initially were responsible for polluting the sites are also responsible for funding the cleaning efforts, with an average of 70 percent of the Superfund site cleanups historically paid for by parties responsible. The program has historically suffered from underfunding, and has been targeted for further budget cuts as of January 2018. (Photo by Joseph Sohm / Shutterstock.com)

A Superfund site is any U.S. land that has been contaminated by hazardous waste. They are highly toxic or polluted and are often found in places like former chemical manufacturing plants. There are more than 1,300 Superfund sites across the U.S., and one report pointed to 327 that will be prone to climate change-caused flooding and sea level rise.

This will mean the spread of pollutants, which disproportionately affect vulnerable and low-income populations. To think that this is a problem for future generations to figure out is a mistake. Just last year, more than a dozen Superfund sites were flooded by Hurricane Harvey in Huston, with two breaches were reported.

Despite warnings from Mr. Breen and other climate advocates, the EPA and The White House seem to be committed to nothing more than simple lip service versus finding an actual solution. Both the head of the EPA Scott Pruitt and the President are climate change deniers; what’s more, President Trump’s spending plan proposed slashing Superfund program funding by almost one-third. This action is shortsighted and puts American lives at risk.

On the positive side of things, Mr. Pruitt has appointed a task force that developed a list of high-risk Superfund sites and says he intends to clean them up. But without funding and little support for climate change planning in the White House, it may be tough for him to follow through with this promise.