Gamification and the Two-Party System 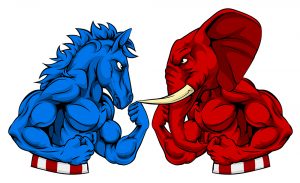 There is a dangerous trend in American politics that puts most issues on a good vs. evil narrative. Each major party sees the other as representative of all things wrong with the world. We’ve drawn our lines in the sand, and to put even one toe out of line is to betray your allies—so most of us stay safely inside the lines, pointing fingers and yelling about how evil the other side is.

This kind of narrative is not productive. Rather than promoting progress, it instead encourages citizens to see those with differing viewpoints as incompatible at best, and less than human at worst.

It also simplifies things in a problematic way. If a person’s beliefs don’t align with one of the two major parties, their point of view will never be represented. For example, where does a pro-life evangelical who aligns economically with Democrats fit into the American system? Or where does the economically conservative, but socially liberal person go? The socialist? The libertarian? If any of these people wants to have a meaningful voice in U.S. politics, they have to align with one party or the other, thus forfeiting some their beliefs so that others can be represented. 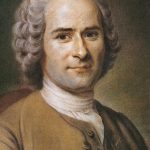 The United States of America was not founded in a vacuum. The founders were well versed in political philosophy and drew their ideas about democracy from diverse sources. The French, in particular, enjoyed a rich and complex history with the early U.S., and Jean-Jacques Rousseau was a political philosopher of particular import.

Rousseau was one of the first to build a political treatise around the idea of a “social contract,” or the concept that a just government derives its legitimacy through an agreement with the citizenry rather than by way of divine mandate (as was the justification for monarchical rule in Europe at the time).

Rousseau’s ideal democracy consisted of magistrates, who organized and implemented laws, and the sovereign, which consisted of the populace. According to Rousseau, an ideal democracy would consist of sovereign citizens who would each independently vote on an issue-by-issue basis to create a society in which each law or legal decision reflecting the general will. At the time of his writing, the kind of democracy he envisioned was seen as both politically and logistically impossible to achieve.

But his influence played a great role in both the founding of the U.S. and in the French Revolution. The United States provided an opportunity for Rousseau’s ideas to be tested, along with those of Thomas Hobbes and John Locke.

One way in which the U.S. did not live up to Rousseau’s ideals is in the prevalence of political parties and factions. In his view, the separation into parties undermined the “general will,” preferring a system where democracy relied upon a populace of unaffiliated voters, motivated by their own self-interest and intellect. George Washington in his farewell address echoed Rousseau’s sentiments, adding that in dividing the nation into political factions, the U.S. runs the risk of falling prey to the interests of foreign nations.

For example, if you choose to be anti-abortion you must also be anti-regulation. And to be in favor of universal healthcare, you must also be for raising the minimum wage—simply because this is how the parties align, whether you like it or not. If you have political views outside of the norm, you either choose not to engage (you don’t vote), or you become a single-issue voter.

It should come as no surprise then that Americans are disillusioned with politics. According to the Pew Research Center, the “U.S. trails most developed countries in voter turnout,” and this is a big problem. The American democratic experiment rests on the idea that our government gets its legitimacy from the people, but if the people don’t vote, the system doesn’t function the way it was intended. Instead of having a government that is representative of the people, we have a government that is merely a reflection of the richest and most powerful among us.

Unfortunately, this dynamic is made even worse by a media bias toward ratings and entertainment and social media pages that purposefully misinform users. For those who do choose to engage in the democratic process, they must subscribe to a philosophy of winning over one of cooperation and conversation. It’s all about beating the other “team,” and the ratings-driven 24-hour news cycle makes this dynamic even more pronounced.

We are collectively obsessed with winning every argument by any means necessary, forgetting to check our knee-jerk reactions at the door. Thoughtful dialogue can be hard to find. We have forgotten that not every conversation has to be about who is right or wrong, and that not every person who disagrees is an enemy/stupid/traitor/communist/racist/misguided/ignorant person. We jump to conclusions and take the worst possible interpretation of what someone has said as proof that they are whatever we thought they were in the first place. (Yes, we realize these are generalizations that don’t necessarily apply to everyone.)

Is it any wonder in a system with low voter turnout that politics has become all about entertainment? It’s in the media’s interest to perpetuate a story of high drama and polarization in America because it gets people to tune into their programing. This doesn’t mean that those stories aren’t real—it just means they get emphasized over other stories, pushed front and center because they are the most sensational.

It also means that the greatest role the electoral college plays in contemporary politics, for all intents and purposes, is to create a state-by-state points system newscasters can exploit during presidential elections to heighten drama. It means that personalities become more important than policy, so that we focused more on Hillary Clinton’s “deplorable” remarks, and on Donald Trump’s lewd comments than we did on either of their policy proposals during the 2016 election.

To see an example of how media bias trends toward entertainment and gamification, look no farther than this CNN article breaking down the Democratic left into “March Madness” style brackets in the race to the 2020 Democratic nomination for president. While it might be entertaining, it doesn’t really represent compelling news analysis.

Instead, it perpetuates the idea that the ultimate goal in American politics is to beat the opponent rather than service the American people. And it isn’t just CNN. FOX News, MSNBC, and most of the major TV news outlets engage in this kind of behavior, and as long as they continue to do so, we’re likely to see more and more polarization in America.

So what’s the answer? Do we change how the media is incentivized? Do we implement a parliamentary system that favors multiple parties, or a system where we vote for party platforms over personalities? Do we keep things the same?

What are your thoughts? We would love to hear what you think about the topic in the comments below.