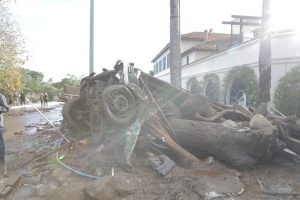 Curiously, there was little to no mention of climate change in coverage of the California floods and mudslides. Photo by Media Bakery13 / Shutterstock.com

In January 2018, floods and mudslides wreaked havoc on a large part of southern California. As you might expect, there was massive media coverage of the disaster. But what might come as a surprise is that there was little to no mention of climate change in any of the reporting—despite the fact that man-made climate change has been proven to influence the severity of natural disasters.

Add to that the fact that another climate change-influenced disaster hit the same region shortly before that—the record-breaking wildfires of 2017—and you might begin to wonder why nobody’s talking about the elephant in the room.

Civics Lesson: The Difference Between Weather and Climate 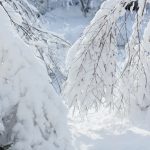 It’s tempting to say that global warming isn’t real when it’s cold outside. Even President Trump said this in a tweet during a record cold wave in the Northeastern U.S. However, weather and climate are two different things. Weather consists of short-term changes in how the atmosphere is behaving. Climate, on the other hand, is the average of weather over time and space. An easy way to remember the difference is that climate is what you expect, like colder and snowier winters in the Northeast—while weather is what you get, like a nor’easter striking the U.S. East Coast and dropping two feet of snow.

Before the floods and fires, southern California had received barely any rain in more than 300 days. In addition, widespread record heat in the region further parched the soil and vegetation. NASA has reported that currently visible impacts of climate change in the Southwest (which includes southern California) include “increased heat, drought, and insect outbreaks, [and] increased wildfires.” The agency added that “flooding and erosion in coastal areas are additional concerns.”

Those wildfires, along with the drought, created the ideal conditions for the January 2018 floods and mudslides.

“In some spots, fire burned with such extreme intensity that it incinerated all vegetation and ‘cooked’ the soil underneath,” UCLA climate scientist Daniel Swain told Pacific Standard. “It’s those really high-intensity burn patches, plus those occurring on steep slopes, that will have the greatest potential for debris flows and flash flooding.”

“There are dozens of square miles of completely denuded mountainsides with slopes steeper than 45 degrees, with 1000+ food drops. Simply a ton, literal and figurative, of unstable topsoil that can move into debris flow,” tweeted California photographer Stuart Palley, who covered the wildfires on January 7, just two days before the epic rainfall began.

Soil, rocks, and charred trees had become “untethered” from the land, according to Pacific Standard. Because of the fires, there were no grasses or small shrubs to hold the trees, rocks, and soil in place. And climate change definitely had an influence on the size and magnitude of those wildfires.

Small wonder that when the rainfall—and it wasn’t exactly a gentle rainfall, either—began, loose soil went careening down those hills and into southern California suburbs.

“The utter chaos presently unfolding in southern California is indicative of the chaotic nature of climate disasters in general,” wrote Justin Theodra in Truthout. “Once ecological thresholds are crossed, disasters set one another off like Chinese firecrackers or falling dominoes.”

We can only expect more of this as we reach the 2-degree-Celsius warming point that will set off unstoppable climate change-influenced weather patterns. Once we lose control over the climate to a “range of ‘natural’ feedbacks,” we’ll start to see a self-sustaining chain of crises.

Given that the drought, wildfires, and subsequent disastrous floods and mudslides are very likely to have been heavily influenced by climate change (and there’s plenty of scientific evidence to back this up), why has the mainstream media been silent about it?

Climate change is subjecting the planet to conditions never seen before in recorded history.

“This is what the science is saying,” said climate scientist Jeff Rosenfeld. “These are not just new odds—these are new weather extremes that are made possible by a new climate.”

Deny global climate change all you want, but the science is very clear about its current and likely future impacts. If you are a climate skeptic or denier, hopefully you will recognize this reality before you’re standing knee-deep in mud and watching everything you own get swept away in a flood.