The Demonization of Parkland Teens Is A Dangerous Distraction 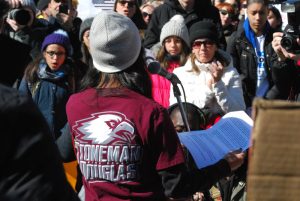 While we’ve been rushing to judgment about the Parkland teens, Congress has been busy taking away our rights. Photo by J. Louis Bryson / Shutterstock.com

“David Hogg is a pawn for the FBI.”

“David Hogg wasn’t at school the day of the shooting.”

“Emma Gonzalez ripped up a copy of the Constitution.”

“Emma Gonzalez attacked a Second Amendment supporter’s truck at a March for Our Lives rally.”

These are just a few of the conspiracy theories and demonizing rumors floating around the internet in response to increasing activism by the Parkland, Fla., teens. You don’t have to look far to find them, and even though all of them have been inarguably false, they continue to be perpetuated.

“It boils down to what we can call confirmation biases,” UC Santa Barbara Professor Miriam Metzgerf told Newsweek. “If it sits with your own world view, something that appeals to you in some way, that’s a very strong factor in determining what people believe… if it comes from a good friend, as well.”

No matter what the facts are, people have chosen to demonize these teens, and unfortunately nothing we do can change their minds. This is the entire problem of this whole debate. You have the two far extreme sides, and no one is listening to the voice of reason in the middle. And when the government says, “Now is not the right time to discuss guns,” it just makes things worse.

To put it bluntly, everyone is in a giant pissing contest, and nothing is getting accomplished. And that’s exactly the point.

Because meanwhile, Congress is sitting comfortably and signing away even more of our freedoms, like the freedom to not be discriminated against by HUD or HHS for being gay, trans, Latino, or a woman who has had an abortion.

How about the NSA and FBI taking the words “honor” and “integrity” and “uphold the law” and “uphold the constitution of the United States” out of their mission statements? Why aren’t we talking about that? What about the re-authorization of Section 702, which allows warrantless surveillance of Americans’ and foreigners’ phone calls, text messages, emails, and other electronic communications?

Yes, let’s keep arguing over something that’s never going to happen—because they can’t take your guns. Any ban would only affect new sales, and no one is going to go door-to-door to see what kind of guns you, a responsible gun owner, have.

Let’s keep demonizing the Parkland teens for standing up for what they believe in—because that’s the example we want to set for our kids when we’re claiming that bullying and mental health issues are the sole cause of these shootings in the first place.

The right that you’re fighting so hard to protect will mean nothing when all our other freedoms are gone. Time to wake up, people.

Riley Bosworth (Rye Bred) is a community activist and non-traditional student at the age of thirty-one. He is currently attending the College of Southern Maryland, majoring in Social Sciences and Human Services, and is a member of the Phi Theta Kappa Honor Society. He is the founder of Lexington Park Community Closet, a non-profit organization which focuses on providing free clothing to local persons in need.