The Myth of Job Creators and Key Benefits of Regulation 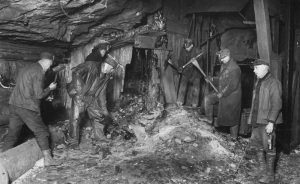 One of the benefits of regulation is safer working conditions. Would today’s miners want to work under the conditions in this photo? Photo: Shutterstock

Conservative Commenter: Whiny liberals are jealous and want to take more money from the rich. The rich are already paying their fair share of taxes, and they furnish the majority of jobs in America. 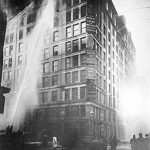 The Triangle Shirtwaist Factory fire, which occurred on March 25, 1911, claimed the lives of 146 garment workers—123 women and 23 men. The fire started at the end of the workday on a Saturday in a wooden scrap bin filled with about two months’ worth of cuttings, all of which were highly flammable. Investigations conducted after the fire found that it was likely started by an unextinguished match or cigarette butt thrown in the scrap bin.

The doors to the stairwells and exits had been locked, which was a common practice at the time to prevent worker theft and unauthorized breaks. When the stairwell to the roof and elevators became too crowded to use, employees crowded onto the single exterior fire escape, which collapsed under the weight and heat of the fire, dropping those on the stairwell over 100 feet to the street below. In total, 62 individuals jumped or fell to their deaths.

In the aftermath of the fire, a Committee on Public Safety was formed in New York City. In addition, the New York State Legislature established the Factory Investigating Commission to monitor factory conditions throughout the state and lobby for remedial measures of legislation where hazards were discovered. The Commission’s investigations led to the passage of 38 new factory regulation laws in New York, making the state one of the “most progressive states in terms of labor reform.”

Eric Koonitsky: The last sentence is correct. Companies will meet demand through the cheapest route. Many companies have a legal obligation to do so. What they will not do, and never have, is “create jobs” because Republicans and too many Democrats, including Obama, gave them massive tax breaks.

Is there a cost to environmental regulations? Of course. There was also a cost to outlawing slavery and child labor. There were costs to the fire safety and other regulations enacted in the wake of the Triangle Shirtwaist Factory fire. There are also massive benefits to such regulations, obvious benefits that you are overlooking in being hyperfocused on the increased costs to employers. Do the

They do cover CBA’s in economics class, don’t they? There is much more to economics than the simple supply and demand curve, which is a crude tool that people who refuse to consider nuance and societal considerations grossly exaggerate the importance of.

What libertarians constantly fail to recognize is that they haven’t discovered a new, better way of structuring society that people are just too economically illiterate to see the utility of. They have rediscovered the way things used to be—before we learned from our mistakes.

Claiming that the highest earners are paying their fair share is begging the question: what constitutes a “fair” share? You have the right to consider the current rates fair, but your proclaiming it fair doesn’t make it so.

Eric Koonitsky is devastatingly handsome, and he also works at a residential facility for people with developmental disabilities. He reads as much as he can, usually about 150 books a year and a bunch of the internet. Eric graduated from Syracuse University but was educated with his library card. He identifies as a supporter of the working class and has liberal views on most social issues.