Were Russia Warnings Ignored and Forgotten About? 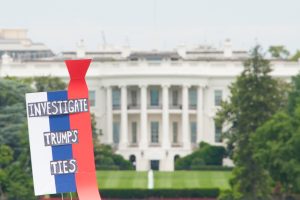 President Trump says nobody warned him about potential Russian infiltration into his campaign. Photo: Shutterstock

President Trump took to Twitter over the holiday weekend to complain about allegations of Russian infiltration in his campaign. “With Spies, or ‘Informants’ as the Democrats like to call them because it sounds less sinister (but it’s not), all over my campaign, even from a very early date, why didn’t the crooked highest levels of the FBI or ‘Justice’ contact me to tell me of the phony Russia problem?” he tweeted.

While former White House spokesman Ari Fleischer rushed to the president’s defense, others were pointing out that, well, actually, the Trump campaign was warned.

A December 2017 report from NBC News stated, “In the weeks after he became the Republican nominee on July 19, 2016, Donald Trump was warned that foreign adversaries, including Russia, would probably try to spy on and infiltrate his campaign, according to multiple government officials familiar with the matter.”

The Federal Bureau of Investigation, commonly known as the FBI, was born in 1908 as a force of special agents created by Attorney General Charles Bonaparte which was designed to be the investigative arm of the Department of Justice. The organization was named the Bureau of Investigation and was renamed the Federal Bureau of Investigation (FBI) in 1935. Many people believe the FBI only investigates domestic crimes, but the bureau addresses all security threats facing the nation. It works with partner organizations to investigate federal crimes such as drug smuggling or wire fraud and threats to national security like possible terrorist actions. The bureau also gathers intelligence, assists other law enforcement agencies, and has the power to arrest and prosecute people suspected of crimes.

Not only that, but the report came in the form of a high-level counterintelligence briefing by senior FBI officials, and both he and Hillary Clinton (whose campaign got a similar briefing) were “urged to alert the FBI about any suspicious overtures to their campaigns.”

Considering all this, it probably was not the wisest move for President Trump to remind the public about this particular item. But it gets better: the president did more than ignore the briefing—his campaign didn’t even volunteer information about the money trail leading from the Trumps to Russia or the many Russians who had been involved in the Trump campaign and transition team.

Apparently neither President Trump nor anyone in his campaign figured it was worth bothering U.S. intelligence agencies about all these connections. Not even after the FBI warned the then-candidate about possible Russian infiltration into his campaign.

A month after receiving the FBI’s warning, President Trump received his first classified intelligence briefing. By that time, people involved in the campaign—including the President Trump’s family members—had met with high-level Russians and people the Russian government sent as emissaries.

So, to summarize: candidate Trump and his campaign staff were warned about Russian infiltration, yet they still heard from many Russians who wanted to partner with the Republican campaign. And despite the explicit message from the FBI to let the bureau know about suspicious overtures, they didn’t say anything to intelligence officials.

Even if those communications were unremarkable, the FBI ought to have been notified about them. Unless the Trump campaign was trying to hide something, that is.