President Trump’s Made Up ‘Legal’ Language

Regardless of the president’s beliefs, there is no actual crime called collusion. Photo by Willrow Hood / Shutterstock.com

We are accustomed to taking our public officials’ word at face value as a country, if not when speaking about their actions, then at least when it comes to how our legal structures and institutions work. But what happens when a president, arguably the ultimate authority within the U.S. government, decides he’s making up the rules as he’s going along?

According to Dahlia Lithwick at Slate, this is exactly what’s taking place. Our current president has invented his very own legal language to muddy the waters in the investigation against him, and the scariest part is that it may be working. The press, no matter their bias, tends to parrot the president’s words because of the authority his office carries whether or not a statement about legality is real or meaningful.

A key example is how President Trump has redefined the legal meaning of word “collusion” for his own purposes. The president regularly and adamantly argues that he has been cleared of collusion charges and that Special Counsel Robert Mueller’s investigation is a “witch hunt.” 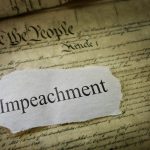 Article II, Section IV of the U.S. constitution outlines the impeachment process for the president and all other civil offices. The impeachment clause stipulates that any official can be impeached by the House of Representatives, tried in the Senate, and “removed from office on Impeachment for, and Conviction of, Treason, Bribery, or other high Crimes and Misdemeanors.” The wording has been seen by many as notoriously vague, as “Treason, Bribery, or other high Crimes and Misdemeanors” has been left up to interpretation since the Constitution was written.

But there’s a problem with that narrative; there is no agreed-upon crime called “collusion.” Instead, the term is understood by legal experts to be a shorthand for a number of possible charges that could be levied against the president. In other words, it’s a vague term, and President Trump is using that to his advantage by suggesting it communicates precision. In doing so he sets up arbitrary standards by which to be measured, rewriting the rules so the president can’t lose.

By spreading the story that collusion is a well-defined term and has been all along (which is not the case), the president can argue that a “witch hunt” is taking place as Mueller investigates the multitude of possible charges that actually represent the broad term “collusion.” He’s able to paint the investigation as biased and overreaching, undermining public faith in the effort even as Mueller conducts his investigation as it was meant to be carried out under the law.