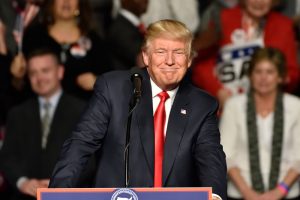 Even the President of the United States is not above the law.
Image: Evan El-Amin / Shutterstock.com

Many read with shock and disbelief the news that President Trump actually believes he has supreme power over investigations conducted by the nation’s intelligence services.

The news came after a memo dated January 29, 2018, written by the president’s then-attorneys John Dowd and James Sekulow, was published on June 2 by the New York Times. President Trump’s attorneys argued that he could not possibly have obstructed the FBI’s investigations into possible Russian meddling in the 2016 election partly because “the President’s actions here, by virtue of his position as the chief law enforcement officer, could neither constitutionally nor legally constitute obstruction because that would amount to him obstructing himself, and that he could, if he wished, terminate the inquiry, or even exercise his power to pardon if he so desired.”

A pardon allows a convict to escape punishment for a criminal conviction. The U.S. Constitution provides pardoning power to the president for all federal crimes. However, the constitution does not authorize the president to release a person from the effects of impeachment. The president can also grant pardons in criminal contempt of court cases. The president can only pardon people who have committed offense against the federal government, not against state or local governments. It also doesn’t extend to civil court matters such as lawsuits. Although a president might technically be able to self-pardon, if they were to do so, it would almost certainly get them impeached.

Of course he hasn’t. Yet. But he has certainly used the bully pulpit of his Twitter account to do everything he can to delegitimize the Mueller investigation, even tweeting that he has the absolute authority to pardon himself in the event that he is accused of wrongdoing.

Dowd and Sekulow’s memo also argued that President Trump should not be required to sit for an interview by Special Counsel Robert Mueller because the documents provided to Mueller by the White House and interviews with senior staff should be enough to answer Mueller’s questions about the president’s actions. “The President’s prime function as the Chief Executive ought not to be hampered by requests for interview. Having him testify demeans the Office of the President before the world,” they wrote.

Constitutional scholars have a few things to say about the memo. For example, Harvard Law School professor Laurence Tribe said that the “sweepingly Nixonian claim of unbounded presidential power is inconsistent with the core American principle that no one is above the law.”

President Trump’s current attorney, Rudy Giuliani, re-opened negotiations with Mueller in April, in hopes of forestalling the “public battle” that would occur if Mueller were to compel the president to testify by issuing him a subpoena. But as time passed, Giuliani changed his tune. Recently he said that he would only agree to a voluntary interview with President Trump if the special counsel’s office provides internal documents about the beginnings of the FBI’s probe in 2016.

As for the subpoena, Giuliani said, “They may do a subpoena. The subpoena would then be contested. That would be going on for months.”

As usual, President Trump took to Twitter to express his opinion that he is being victimized by the investigation. “There was No Collusion with Russia (except by the Democrats). When will this very expensive Witch Hunt Hoax ever end? So bad for our Country. Is the Special Counsel/Justice Department leaking my lawyers (sic) letters to the Fake News Media? Should be looking at Dems corruption instead?” he tweeted.

On June 3, Giuliani doubled down on his claim that the president can’t be subpoenaed. “In no case can he be subpoenaed or indicted,” he told HuffPost. “I don’t know how you can indict while he’s in office. No matter what it is.”

The problem with that is… there is historical precedent to back a subpoena up. President Bill Clinton was subpoenaed by Special Counsel Ken Starr for his testimony in the Monica Lewinsky case while he was in office, and the world didn’t fall apart then. CNN said at the time, “The subpoena presents a profound political and legal dilemma for the president. Challenging the subpoena could result in a political nightmare and spark a constitutional crisis.”

The same holds true for President Trump. If he is subpoenaed by Mueller and he challenges the subpoena, it could indeed spark a constitutional crisis. The president is not above the law, even if he thinks he is.