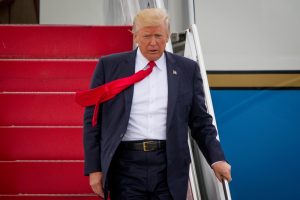 President Trump’s complaints about the cost of the Mueller investigation are ironic, considering the cost of his trips to Mar-a-Lago. Photo by Michael Candelori / Shutterstock.com

Last week, President Trump took to Twitter to complain about how much Special Counsel Robert Mueller’s investigation has cost the nation. “A.P. has just reported that the Russian Hoax Investigation has now cost our government over $17 million, and going up fast! No Collusion, except by the Democrats!” he tweeted.

The irony is that President Trump signed into law a budget that spends about $4.1 trillion in fiscal year 2018. In terms of that gargantuan expenditure, Mueller’s investigation is just a drop in the bucket. According to the Washington Post, $17 million in a $4.1 trillion budget is like making $50,000 a year and spending 20 cents.

Judicial Watch, a conservative group, told the Associated Press that each trip President Trump has made to his Mar-a-Lago resort have cost $1 million—and that number only includes Secret Service protection and travel on Air Force One. If Judicial Watch’s calculations are correct, the president’s 17 trips to Mar-a-Lago since his inauguration have cost … $17 million. 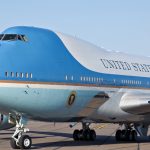 Technically, Air Force One is used to describe any aircraft carrying the president, but since the middle of the 20th century, the name has been used for planes that are designed specifically to meet the safety and comfort needs of the president and any traveling companions. The latest Air Force One is capable of refueling mid-air, thus allowing the plane virtually unlimited range. Its electronics are hardened to protect against an electromagnetic pulse, and it has advanced secure communications equipment that would allow Air Force One to be a mobile command center in the event of attacks against the United States. Air Force One is operated and maintained by the Presidential Airlift Group, founded in 1944 by President Franklin D. Roosevelt as the Presidential Pilot Office. (Photo by Christopher Halloran / Shutterstock.com)

However, Judicial Watch admits that its estimate doesn’t include things like “airlifting equipment such as the presidential limousines” and it doesn’t include all the costs for protecting the president—so, that number is likely much higher. In July of 2017, the Washington Post reported that the Coast Guard had spent about $6.6 million just on guarding Mar-a-Lago (it is, after all, a beachfront resort) over the course of the five presidential visits that had occurred by mid-2017.

The Coast Guard also protects President Trump on recreational trips. For example, the service patrols the Potomac River when the president plays golf at his Trump National Golf Club in Sterling, Virginia. Guess how many trips the president has made there? Thirty-one! And the costs of those trips are not included in the total.

And the trips the president has made to his club in Bedminster, New Jersey, cost $40,000 or more just in travel time.

Of course, we can’t know the true cost of all the trips President Trump has made to Mar-a-Lago or his many other properties until the White House releases its numbers to the General Accounting Office, just as the Obama administration did before him. Unfortunately, the president and his staff don’t seem to be forthcoming with that information despite repeated requests from the GAO.

On May 9, the GAO’s general counsel, Thomas Armstrong, wrote to White House Counsel Donald McGahn. “I understand that attorneys from your office and the National Security Council (NSC) will not respond to inquiries or otherwise engage with GAO staff during the course of our reviews,” the letter read. “This approach represents a clear departure from past practice.”

Considering the fact that President Trump’s golfing and vacation trips have cost at least as much as the Mueller investigation, the president would do well to remember Bible verse Luke 6:42: “First take the log out of your own eye, and then you will see clearly to take out the speck that is in your brother’s eye.”