What Unions Achieved for Teachers This Year 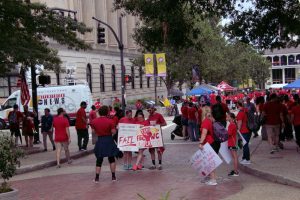 North Carolina teachers protested a lack of funding for students, among other things. Photo by James Mayo / Shutterstock.com

Unless you’ve been living under a rock, you probably know about the teacher protests in states across the country. A lot of those protests received support from the individual states’ teachers’ unions, and with good reason: many teachers are buying supplies for their students—some even taking second jobs so they can afford to do so—not to mention the austerity measures that have plagued American schools since the 2008 recession. Many teachers haven’t seen a pay increase in years, either.

Teachers are understandably frustrated by needing to conduct their classes with ancient, outdated materials and few resources for students who may not have access at home to computers and other digital tools that have become academic needs. Many teachers see these as basic necessities for today’s students.

No wonder that teachers, who have had to do more and more with less and less, had finally had enough. 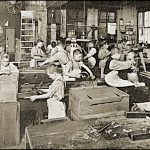 Labor unions came into existence to protect the working public from exploitation by employers and abuses such as being forced to work in sweatshops or other unsafe conditions. The unions used the strike, or work walkout, as their primary tool in achieving their goal of negotiating better wages and more safety for their members. The first successful strike in the building trades happened in 1791, when carpenters in Philadelphia campaigned for a 10-hour workday.

From that point, as the need for skilled and unskilled labor rose during the Industrial Revolution, organized labor came into its own as unions such as the United Mine Workers and the American Federation of Labor (now known as the AFL-CIO) began to become more recognized and gained more negotiating power. In response to this organizing, Congress created the Department of Labor in 1884 to monitor employment and workplace issues.

“During the recession, states across the country adopted austerity budgets that slashed funding for schools, and our students who need the most bore the brunt of those cuts,” National Education Association President Lily Eskelsen Garcia told CNN.

So, what have the protests and strikes done for teachers—and students? Let’s look at a few states to see.

In West Virginia, teachers demanded better pay and a fix to the Public Employees’ Insurance Agency, their health coverage program. Although Governor Jim Justice had signed off on a 2% pay raise for teachers and 1% raises for each of the next two years, that increase was not enough to keep up with inflation. After nine days, Justice granted a 5% raise for teachers and issued an executive order that should create a long-term revenue solution to the Public Employees’ Insurance Program. As part of the negotiations, West Virginia’s legislature also gave all state employees a raise.

In Arizona, whose teachers’ salaries are near the bottom of the nation, teachers, backed by Arizona Educators United, wanted a 20% raise for teachers by next school year, and yearly raises after that, until Arizona teachers’ salaries reach the national average. The negotiations between the union and the state ended when Arizona’s governor signed an education funding bill into law. The law raises teachers’ pay by 20% over the next three years. It also addressed teachers’ grievances about lack of access to current textbooks, technology, and infrastructure by increasing funding for support staff, upgraded technology, new textbooks, and more.

But it wasn’t all sunshine and roses. In Oklahoma, where teachers’ salaries are in the bottom three states, the teachers’ union wanted $10,000 salary increases for teachers, $5,000 raises for support staff like cafeteria workers and janitors, and $200 million in educational funding. Before the walkout began, Governor Mary Fallin had approved an average raise of $6,100 for teachers, $1,250 for support staff, and a $50 million increase in education funding. Despite nine days of teacher protests, the legislature stuck to its guns and the walkout ended with no additional school funding.

Teacher protests in Kentucky, Colorado, and North Carolina all had varying levels of success. Most of the time, teachers got at least some of what they wanted.

“There’s still plenty of work to be done,” Eskelsen Garcia said. “If we don’t see continual improvements in how state leaders prioritize our students, there will be accountability in November.”