Why Did McConnell Cancel the Senate’s August Recess? 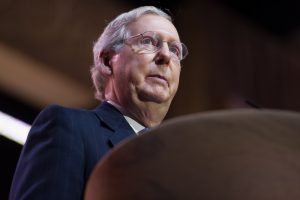 The cancellation of the Senate’s August recess has as much to do with politics as it has to do with legislation. Photo by Christopher Halloran / Shutterstock.com

Senate Majority Leader Mitch McConnell has decided to cancel most of the Senate’s traditional August recess. He told news outlets that the Senate would only leave for the first week in August because of what he referred to as “historic obstruction” by the Democrats, apparently having forgotten about the years of obstruction the Republican-controlled House and Senate waged against President Barack Obama.

“The August recess has been canceled,” McConnell said. “Senators should expect to remain in session in August to pass legislation, including appropriations bills, and to make additional progress on the president’s nominees.”

McConnell had been under tremendous pressure from both President Trump and more than a dozen Republican senators to cancel the August recess. Although McConnell cited the need to pass legislation as the reason for canceling most of the recess, the majority leader also hopes to keep vulnerable Senate Democrats from being able to return to their home states for campaigning efforts. 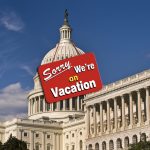 Every year, the Senate recesses for the month of August. This tradition began in the Senate’s early years, when it typically worked from December through the spring, adjourning before Washington, D.C.’s notoriously hot and steamy summers became overwhelming. During the 1920s, the latest climate control technology was brought to the Senate chamber, but it couldn’t cope with the hottest days, so senators still needed to escape the worst of the heat and humidity. By the middle of the 20th century, a more modern air conditioning system was installed, but that caused other problems: the job of a senator became a full-time, year-round position with very few breaks. In 1970, Congress mandated a summer break as part of the Legislative Reorganization Act.

There are 10 Democratic senators up for re-election in the 2018 mid-term elections in states that President Trump won. Senator Jon Tester of Montana, for example, has to travel a long distance to return to his home state to get on the campaign trail. In 2016, when Senate Republicans were facing some difficult re-election challenges, the August recess remained intact.

Despite Democratic senators’ need to hit the campaign trail to secure re-election, Senate Minority Leader Chuck Schumer said the Democrats would “welcome this additional time” because it gives us the opportunity to “require our Republican colleagues to do something about [health care legislation].”

Although Senate Republicans were glad to see most of the recess canceled, some said that the Senate should be working more hours than its traditional late Monday through early Thursday afternoon schedule.

“It is important to remember that simply canceling the August state work period is not the goal,” said Senator David Perdue, a Republican from Georgia. “We should be working nights and weekends now to get the results the American people sent us here to deliver.”

If Senate Democrats and Republicans can cooperate on spending bills like the annual defense authorization bill and speed up consideration of President Trump’s nominees, it’s possible that McConnell could decide to extend the August recess.

But McConnell doesn’t see that happening. “If you look at the amount of work that we have to do, it’s inconceivable to me that we can’t use these weeks. Even with cooperation, we’ve got a lot of appropriations bills to pass,” he said. The Senate has to pass spending bills by September 30 to avoid problems like a government shutdown.

Schumer also agreed that extending the August recess beyond one week was unlikely. Democrats want to bring to the floor several health care proposals including broadening access to Medicare, creating a reinsurance program designed to lower premiums, and expanding tax credits related to health coverage. The House of Representatives also takes a recess in August, but some House members are also calling for a cancellation of their recess this year as well.

Difficult re-election campaigns or no, Democratic and Republican Senators are going to remain in Washington to deal with issues that need to be addressed as soon as possible. Whether that will have an effect on Senate Democrats’ chances of re-election, we won’t know until November. At the very least, we hope that its stated goal does come to pass: that the Senate uses the time to actually pass legislation and avoid a government shutdown.