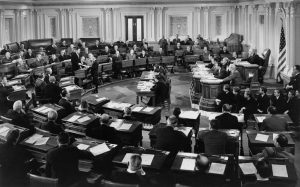 President Donald Trump’s ongoing ties to his business empire has caused quite the commotion amongst lawmakers. According to The Washington Post, nearly 200 democratic members of Congress have sued the president for failure to comply with a Constitutional provision known as the Foreign Emoluments Clause, which requires President Trump “ to seek permission from Congress before taking payments or gifts from foreign governments.”

Last Thursday, a federal court hearing was held to enforce this clause. Senator Richard Blumenthal and dozens of Democrats argued that the president has failed to receive consent from Congress for the benefits his business may have received from foreign entities. Earlier this year, President Trump stepped down from running his $3 billion empire, passing the torch to his two sons, Eric and Donald.

But despite officially passing on the reigns to his sons, the president still retains ownership interests, which he refused to sell or put into a blind trust before taking office, as previous presidents have done. Democratic lawmakers have also accused the president of benefitting financially from payments made by entities from foreign countries to Trump Tower and his hotel in Washington, D.C. 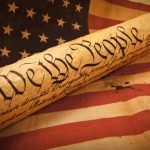 Under Article VI of the Articles of Confederation, the Foreign Emoluments Clause sought to shield the republican character of the United States against corrupting foreign influences. The clause states, “No Person holding any Office of Profit or Trust under them [the United States], shall, without the Consent of the Congress, accept of any present, Emolument, Office, or Title, of any kind whatever, from any King, Prince, or foreign State.” The clause applies to “all officials holding appointed positions in the Judicial and Executive Branches of the national government.”

Aside from safeguarding against corruption by foreign agent, the foreign emoluments clause could also “shield the nation from a threat to national security,” which serves as a main priority for the U.S.

Last week, a hearing was held at the U.S. District Court for the District of Columbia to determine whether or not the lawmakers bringing the case have “suffered the required injury to bring the case forward,” according to The Hill. Democrats argue that they have been “injured” on the basis of not being allowed to vote on whether or not the President can accept the gifts, which is a constitutional right guaranteed by the Foreign Emoluments Clause.

On the other hand, the Trump administration argued that Democrats have not been hurt by the president’s business affairs, as they are still technically allowed to pass legislation that makes requirements of the president. However, part of the issue stems from the fact that the president has not openly shared the gifts or payments he would like to accept—instead, Congress is left to find out about these payments, gifts, and benefits after the press reports on them.

If the this case is allowed to move forward, Democrats may also finally gain the ability to look into Trump’s tax returns and other financial statements.

Nothing endangers democracy more than corruption. The Founding Fathers wrote the emoluments clause because they were concerned about foreign corruption in the United States. In this case, it would be wise for Republican leaders to hold the president accountable, for the sake of our country.