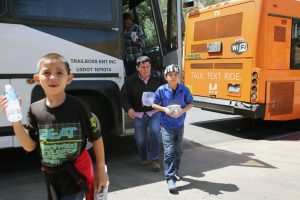 Refugees from Central America get off a Border Patrol bus at the McAllen bus station in Texas.
Photo credit: Vic Hinterlang / Shutterstock

The topic of immigration has become nearly inescapable in the past few weeks, as a flurry of reporting on the separation of migrant families has hit the presses. The “zero tolerance” practices initiated by the Trump administration have prompted a veritable storm of public outcry, from ordinary citizens to some of the highest public officials to all of the living First Ladies.

And, of course, there has been no shortage of insults, claims, blaming, speculation, assumptions, and justification for our government’s current actions. Like any hot button issue, things have quickly become confusing, facts mingling with opinion (and sometimes outright lies). This article by Vox is a great resource for clearing up some of the questions you may have about what exactly is going on at the U.S.’s southwest border, but if you’re short on time, we’ve provided a brief synopsis below: 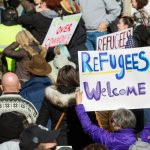 Individuals who wish to apply for asylum must meet three basic requirements. First, the individual must establish a credible fear of persecution should they return to their country of origin. Next, that persecution must fall under one of five protected classes: race, religion, nationality, political opinion, or particular social group. Finally, the individual must prove that the government of their home country is either involved in said persecution or is unable to protect them.

How many children have been separated from their families?

Current estimates are that at least 2,700 children were separated from their parents between October 1, 2017, and May 31, 2018. The current outcry is due in part to the massive increase in these separations just between April 18 and May 31, during which 1,995 of the separations occurred (74%). This coincides with the announcement from Attorney General Jeff Sessions in April of the administration’s “zero tolerance” policy.

Why are children being separated from parents?

The decision by the Trump administration to prosecute all adults who cross the border illegally makes separation inevitable. Whereas former administrations have exempted family units from prosecution or detained families together, prosecuting adults in criminal court means that they get sent to a federal jail to await trial—where their children cannot accompany them. So, while there is no official rule stating that separation must occur, it is a byproduct of the practice of criminally prosecuting all illegal border crossings rather than routing these cases through immigration court.

What is the “catch and release” practice people keep mentioning?

When immigrants come to the U.S. seeking asylum, they are afforded protections as per U.S. and international law. These laws protect them from simply being shipped back to their countries of origin and put limits on how long and under which conditions children may be detained.

In 2014, the Obama administration tried to respond to the family immigration issue by capturing and detaining several hundred families of immigrants—but the federal courts stepped in and dictated that these families could not legally be held for months while their cases in immigration court were pending. The administration complied with this federal ruling and ended up releasing most of those families. In some cases, those families never returned for their court dates, simply disappearing into the U.S. instead. This process was dubbed “catch and release.”

Criminally prosecuting all adults crossing the border illegally enables the Trump administration to sidestep immigrant detention laws, instead designating immigrants as criminals that can be held indefinitely in federal jail. When this happens, the children who were with them are designated as “unaccompanied minors” and put into Office of Refugee Resettlement (ORR) centers instead of immigrant detention centers; there, they can be kept for months at a time (versus just 72 hours) while foster care is arranged. But at 95% capacity, these centers won’t be enough, and solutions like tent cities are now being put on the table for consideration.

The media was recently allowed to tour one of these detention centers for boys. Read the details in this article from The New York Times.

What happens after the parents have completed their criminal trials?

In theory, parents and children can be reunited—and that’s what Immigration and Customs Enforcement (ICE) and the Department of Homeland Security (DHS) claim. The problem is that while these departments say children and parents may be reunited in civil immigration detention after they have finished their criminal sentences and are pursuing their asylum case… there doesn’t seem to be an official system for doing so.

While there have been some flyers posted with a phone number parents can call to reunite with their children, there’s one key detail that can make that impossible: immigrants in detention don’t have phone access. Not to mention that in some cases, parents are being deported without their children—and vice versa.

Is it true that there is a “Democratic Law” requiring family separation?

No. Family separation is a Trump administration policy that the president and attorney general 100% have the power to change. If they want to. According to Vox, “the law addressing unaccompanied children was passed overwhelmingly in 2008 and signed by George W. Bush, while the restriction on detaining families is a result of federal litigation.”