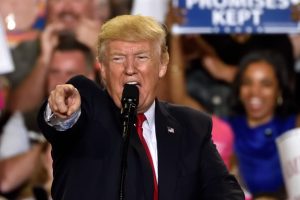 Does the Trump administration’s playbook have its origins with Steve Bannon? Photo by Evan El-Amin / Shutterstock.com

As the world witnessed President Trump’s temper tantrum after the G7 summit, we’re sure we weren’t the only ones humming the song “Blame Canada” from the South Park Movie soundtrack.

However, there may be something going on under the smokescreen generated by the president’s tweetstorm. Some experts even suggest that under this manufactured anger about Canadian Prime Minister Justin Trudeau’s (quite polite and adult-like) comments about tariffs and what happened at the summit may be hiding a deeper, and scarier, possibility.

In a Washington Post op-ed, award-winning journalist and columnist Jim Hoagland suggests that European officials fear President Trump is laying the groundwork for withdrawing from the World Trade Organization. While some may not think that’s a big deal because they believe America has been shafted by global trade groups, this is something that should be taken very seriously. The WTO adopts and enforces global rules of trade and provides a way for conflicts between nations to be settled without resorting to warfare.

The World Trade Organization is the only international organization dealing with the global rules of trade between nations. Its main function is to ensure that trade flows as smoothly, predictably, and freely as possible. It came into existence in 1995 as the successor to the General Agreement on Tariffs and Trade (GATT) established in the wake of World War II.

The WTO came to replace GATT because while GATT covered the trade of goods, it did not cover trade agreements about intellectual property and services. Its framework for trade policies includes non-discrimination, reciprocity, binding and enforceable commitments, transparency, and safety values. The WTO has about 160 member nations which account for about 95% of world trade. About 25 other nations are negotiating membership.

“Trump may be dreaming that undoing the world’s rules of trade would let America’s overwhelming economic power reorder global trade balances in this country’s favor,” Hoagland wrote. “The president may welcome such a very Trumpian, dog-eat-dog world. But even if that is not Trump’s intent in whipping up popular anger against globalization, such a world could well be the result of the reckless course he has chosen.”

But is the president’s strategy really as reckless as it seems?

There is mounting evidence that the White House is running a so-called chaos strategy: using “conflict to create a constant state of destabilized perception, in order to manage and control.” Anyone who observed not only the Trump campaign but the Trump presidency can see this at work. The president’s tweets can destabilize and steal headlines, not only the U.S. but in countries around the world. As Vanity Fair put it, “[President Trump] is the Distracter in Chief, a decoy in the bully pulpit whose self-perpetuating charade provides the perfect cover while shadier actors systematically transmogrify the democracy concealed in his prodigious shadow.”

And who is the architect of President Trump’s chaos strategy? None other than Steve Bannon, chief executive of the Trump campaign and former White House Chief Strategist.

But why would Bannon do such a thing? It’s easy when you listen to him speak. “I’m a Leninist,” Bannon told the Daily Beast’s Ronald Radosh in 2013. “Lenin wanted to destroy the state, and that’s my goal too. I want to bring everything crashing down, and destroy all of today’s establishment.”

Bannon also said that the goal of bringing down the entire establishment included the leaders of the Republican Party in Congress. As the East Coast coordinator of the Tea Party (or so he told Radosh), his plan was to get Tea Party candidates nominated onto the Republican ticket and then back campaigns that seemed winnable. And if Republican elected officials didn’t espouse Tea Party ideals, “we would force them out of office and oppose them when the next election for their seats came around.”

By adding Bannon to his campaign and White House staff, President Trump has indicated that he’s more than happy to run his own campaign the same way: destroy the current Republican party leadership and the Republican party as most people know it.

Lenin himself once wrote, “The art of any propagandist or agitator consists in his ability to find the best means of influencing any given audience, by presenting a definite truth, in such a way as to make it most convincing, most easy to digest, most graphic, and most strongly impressive.”

President Trump has found that the best means of influencing his base, or his detractors—or really anyone at all—is by his tweets and his rhetoric. Although he very rarely presents truth, he does present his fabrications in such a way as to make them convincing and he presents the chaos he’s creating in the world as “making things fairer for America.” In doing so, the president is carrying out Bannon’s wish that the Republican leadership—and the state itself—be destroyed.