What Laura Bush Had to Say About Separating Migrant Families 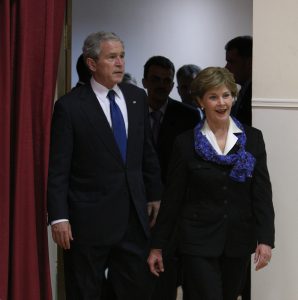 Laura Bush spoke out last week against separating undocumented immigrant families. In her op-ed published in The Washington Post, the former first lady called the practice “cruel” and “immoral.”

“I live in a border state,” Bush wrote. “I appreciate the need to enforce and protect our international boundaries, but this zero-tolerance policy is cruel. It is immoral. And it breaks my heart.”

Bush also addressed the controversy of housing migrant children in “tent cities,” which she compared to the Japanese internment camps that were set up during World War II.

“Our government should not be in the business of warehousing children in converted box stores or making plans to place them in tent cities in the desert outside of El Paso. These images are eerily reminiscent of the internment camps for U.S. citizens and noncitizens of Japanese descent during World War II, now considered to have been one of the most shameful episodes in U.S. history.” 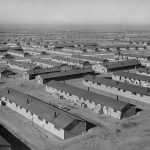 Following the attack on Pearl Harbor, President Franklin Roosevelt issued Executive Order 9066, which charged the military with rounding up anyone of Japanese descent and placing them in internment camps. An estimated 120,000 Japanese people living in the U.S. were forcibly removed from their homes and placed in these camps. It is considered one of the most shameful civil rights violations in American history.

Japanese-American actor George Takei, who played Hikaru Sulu in the hit series Star Trek, sees the similarities all too well. At the young age of five, he and his family were forced into an internment camp. But as Takei notes, what is currently happening along the southwestern border is in many ways worse than what he had to endure.

“At least during the internment of Japanese-Americans, I and other children were not stripped from our parents,” Takei wrote in an op-ed for Foreign Policy magazine. “We were not pulled screaming from our mothers’ arms. We were not left to change the diapers of younger children by ourselves.”

And while Takei and Bush both recognize that illegal immigration is a problem, they sincerely believe there are better solutions.

“In 2018, can we not as a nation find a kinder, more compassionate and more moral answer to this current crisis?” Bush posed. “I, for one, believe we can.”

ON Wednesday, June 20, President Trump signed an executive order to end the practice of separating families at the border after facing incredible pressure from the American public and lawmakers on all sides of the aisle. This is one small step in the right direction, but there is still much to be done to solve the current crisis, including figuring out how to reunite the thousands of families torn apart in recent months.

“There will not be a grandfathering of existing cases,” said Kenneth Wolfe, who is a spokesman for the Administration for Children and Families. That statement was later redacted by Brian Marriot, senior director of communications for ACF, who said they are still working on a plan for reunification.