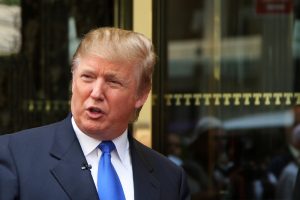 Immigration has always been a key talking point in Donald Trump’s political strategy. During the campaign season, then-candidate Trump vowed to “establish new immigration controls to boost wages and to ensure that open jobs are offered to American workers first.” But court documents show that in 1980, he himself hired hundreds of undocumented Polish immigrants to demolish a building in New York City.

The building in question was the Bonwit Teller, located on Fifth Avenue. Donald Trump wanted to demolish it to make room for his 58-story Trump Tower.

Foreman Zbignew Goryn testified that President Trump first noticed the Polish workers when he visited a worksite in the nearby vicinity.

“He liked the way the men were working on 57th Street,” Goryn told the court. “[Trump] said, ‘Those Polish guys are good, hard workers.’”

Do undocumented immigrants have Constitutional rights? The short answer is yes. Section one of the 14th Amendment reads as follows:

“No state shall make or enforce any law which shall abridge the privileges or immunities of citizens of the United States; nor shall any state deprive any person of life, liberty or property, without due process of law; nor deny to any person within its jurisdiction the equal protection of the laws.”

In 2001, the Supreme Court ruled in Zadvydas v. Davis that the “due process” outlined in the 14th Amendment applies to all foreigners whose presence is “unlawful, involuntary, or transitory.”

According to the New York Times, workers were paid between $4 and $5 per hour for 12-hour shifts, seven days per week—well below the $11 per hour minimum wage scale for the union at that time. Not only that, but workers were also not provided with the proper safety equipment.

“We worked in horrid, terrible conditions,” said Wojciech Kozak, one of the undocumented Polish workers. “We were frightened illegal immigrants and did not know enough about our rights.”

In 1983, the workers and their contractor, William Kaszycki of Kaszycki & Sons, filed a lawsuit against Donald Trump for unfair labor practices. The case dragged on for 15 years before it was settled for $1.375 million.

As Newsweek reports, the settlement was kept confidential for nearly twenty years. But in November 2017, U.S. District Court Judge Loretta A. Preska ordered the documents to be made available to the public in response to a motion filed by the Reporters Committee for Freedom of the Press and Time Inc.