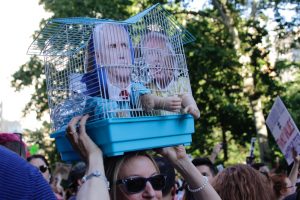 A “zero tolerance” immigration policy. Children being separated from their parents at the border. The constant shouts of “they’re here illegally, they should be imprisoned!” Although many people may see the Republican party’s hardline stance on immigration as something new, if you take a look back at history, these beliefs have been a part of the Republican mindset for decades.

Although President Trump did write an executive order that would end the separation of families at the border, it was only because of large-scale public outcry. However, as the New York Times editorial board points out, “Republicans who spoke up this time should be asking themselves why a president of their party felt he was enforcing its principles by breaking apart families and caging children.”

How did a tough immigration stance become part of the Republican party’s DNA? It started a long time ago. Immigration has been a growing concern among Republican voters for many reasons, not the least of which are economic and cultural concerns, and it all started with paleoconservative commentator Pat Buchanan. He kept the Republican party focused on immigration as the core problem in the country, but the party’s anti-immigrant sentiments became a key part of its message during the presidency of George W. Bush.

Civics Lesson: The Statue of Liberty 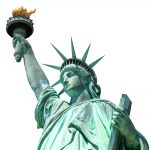 The Statue of Liberty was a gift of friendship from the people of France to the United States. It was dedicated on October 26, 1886 by President Grover Cleveland. The copper statue was designed by French sculptor Frédéric Auguste Bartholdi and built by Gustave Eiffel (yes, that Eiffel, the one after which the Eiffel Tower is named). It is situated on Liberty Island, which is south of Ellis Island and arguably the busiest immigration port of entry for many decades. At its base is a plaque reading, “Give me your tired, your poor, your huddled masses yearning to breathe free,” part of poet Emma Lazarus’s sonnet, “New Colossus,” which she wrote for a fundraiser auction to raise money to build the pedestal on which the statue sits.

Bush wanted to make comprehensive immigration reform a priority in his second term, and the Senate passed many bills on border security, a guest worker program, and a “path to legalization” for undocumented immigrants. Unfortunately, hardcore conservatives in the House rejected the idea of legalization and decided to put their focus on border security only.

Conservative talk radio added its voice to the anti-immigration sentiment, taking Bush to task for being “soft” on immigration. Between the rise of the Tea Party and the pressure from the ultra-conservative representatives in the House, any immigration reform that included the possibility of undocumented immigrants becoming “legal” became a political hot potato.

Bush isn’t the only Republican who got slammed by the ascendant Tea Party. Senator Marco Rubio, who had earned their seal of approval three years before, quickly had that approval revoked when he began working with the bipartisan “Gang of Eight” to build a compromise on immigration policy. Their bill passed the Senate, but House Speaker John Boehner refused to even bring it to a vote in the House. For Rubio’s part, he began to deny that he’d ever participated in the compromise. After all, he wanted to get re-elected, and in order to do that, he had to be in the Tea Party’s good graces.

The executive orders President Obama issued to protect Dreamers and expand deportation deferments only made conservatives angrier. Boehner even said that as long as Obama was president, the House “couldn’t possibly take up reform legislation because it couldn’t trust Mr. Obama to carry out said legislation.” And so, the battle lines grew even harder.

However, Republican candidates have been playing to their arch-conservative base for a long time. Although their rhetoric wasn’t as obviously racist as it may have been previously, there were still plenty of right-wing dog whistles to be heard.

In 2013, Republican representative Steve King of Ohio said Dreamers were drug mules with “calves the size of cantaloupes because they’re hauling 75 pounds of marijuana across the desert.” In 2011, Alabama Republican Representative Mo Brooks said he would “do anything short of shooting” undocumented immigrants. In 2010, Rep. Louis Gohmert of Texas began talking about what has since been mocked as the “terror baby” plot—radical Islamists were going to impregnate women, who would infiltrate the U.S. and give birth here, returning to the Middle East for terrorist training, and then returning to the U.S. to wreak havoc.

By the time President Obama’s term was over, the Republican base had a “skeptical-verging-on-hostile view of immigration had become a core tenet of party orthodoxy—like opposing gun control or denouncing Obamacare.” And now, President Trump is trying to reassure his base that he hasn’t gone soft on immigration, even planning new crackdowns in the days leading up to the mid-term elections.

Clearly, the Republican party has done a lot to pave the way for President Trump’s draconian immigration policies. They have become deeply embedded in the idea that it’s their sacred duty to defend the Constitution from anyone they deem as a “usurper.” Now, it’s time for them to actually defend the Constitution from a usurper—a president who tries to run roughshod over its protections. Constitutional protections apply to everyone in America, not just the people who were lucky enough to be born here.