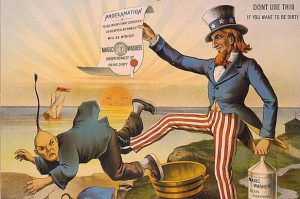 Uncle Sam kicks out the Chinaman, referring both to the 1882 Chinese Exclusion Act, and also to the “Magic Washer.” The actual purpose of the poster was to promote the “George Dee Magic Washer,” which the machine’s manufacturers clearly hoped would displace Chinese laundry operators. Image published in 1886.
Attribution: By The George Dee Magic Washing Machine Company – 19th century U.S. commercial/political cartoon.

The U.S. didn’t always have illegal immigrants. Back when America was still the “New World,” Europeans arrived in droves, put stakes in the ground, and claimed the land occupied by Native Americans as their property. Then, they abducted millions of Africans and brought them to the New World as slaves. After the United States declared its independence in 1776 and formally became independent from Britain in 1783, immigrants flocked to the land of the free, hoping to find their new beginnings there, too.

The border was open for seven years, but soon it became clear that some people were more welcome than others. George Washington signed into law the Naturalization Act in 1790, which explicitly stated that only white people who had been in the U.S. for two years could become citizens—leaving out, of course, indentured servants, slaves, and most women.

Newcomers to the U.S. were met with disdain from Anglo-Saxon Protestants, the typical argument being, “We were here first” (except, not really—remember all those Native Americans we steamrolled in our race to establish a country in the name of freedom and equality?). The Irish, Italians, and other immigrants were also discriminated against simply for being Catholics (if that sounds ludicrous to you, consider the current discriminatory attitude many have against all Muslims). 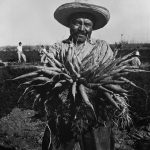 The Bracero Program refers to a series of laws and agreements created when Mexico and the United States signed into law the Mexican Farm Labor Agreement in 1942. The program was created to help fill the labor shortage in the agriculture industry; it guaranteed “decent living conditions” to migrant workers, set a minimum wage of $0.30 per hour, and established that workers wouldn’t be discriminated against as non-whites.

The Bracero Program was not without its problems. Within a few short years, many employers became so dependent on braceros that bribery and working outside of the documented system became common practice for both employers and workers. Because Mexican workers were desperate for work and willing to do so at wages any American would laugh at, there was growing concern that the program would increase competition while lowering wages. In theory, the program had protections for both migrant and domestic workers, but in practice many of these regulations were ignored outright.

Fast forward to the 19th century and disdain for immigrants shifted to the Chinese, who had largely begun immigrating to the United States during the California Gold Rush of 1848-1855. The Panic of 1873 triggered the Long Depression, lasting between 1873-1879 in the U.S., during which Chinese immigrants were blamed for high unemployment and low wages. In May of 1882, President Chester A. Arthur signed into law the Chinese Exclusion Act, prohibiting all immigration of Chinese laborers.

This law was the first time the federal government regulated immigration, and from that our contemporary definition of “illegal immigrants” was born. The next major immigration law passed by the U.S. federal government was The Immigration Act of 1924, which established “national origins” quotas that capped the number of immigration visas at two percent of the total number of people of each nationality already residing in the U.S.—in essence allowing Europeans to completely dominate the flow of immigration while giving little to no access to those from Asia, Africa, and other parts of the world.

Those quotas were abolished in 1965 for being extremely racist and discriminatory. They were replaced by per country caps established by The Immigration and Nationality Act of 1965, signed into law by President Lyndon B. Johnson. This new act capped total immigration from the Eastern Hemisphere at 170,000, with a 20,000 limit per country. Countries in the Western Hemisphere were capped at 120,000 per year. It also established preference categories for immigrants based on their skills and whether or not they had family residing in the United States.

The problem was, up until 1965, immigration from Latin America was mostly unrestricted. In addition, up until that point, immigrant “guest” workers had long been allowed and encouraged to work—legally—in the United States since the 1940s under the U.S. government’s Bracero Program. That program, which had brought in about 200,000 Mexican workers per year, was terminated in 1964, just prior to the new Immigration Act. So, in addition to a sudden cap on immigration from Latin American countries, these major changes to U.S. policy suddenly made millions of previously legal Mexican workers “illegals.”

In the years since, the stigmatization of immigrants has only grown. Any newcomers, especially those who are not white, are seen by many as a threat to “our” jobs, identities, our culture, and even our lives.