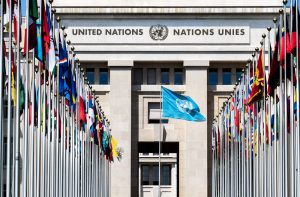 The U.S. announced on June 19 that it was withdrawing from the UNHRC.
Image: Giorgio Caracciolo / Shutterstock

On June 19, 2018 the U.S. announced its withdrawal from the U.N. Human Rights Council (UNHRC). The controversial move sparked immediate backlash from leaders both domestic and abroad.

“Disappointing, if not really surprising, news,” al-Hussein tweeted. “Given the state of human rights in today’s world, the U.S. should be stepping up, not stepping back.”

U.K. Foreign Secretary Boris Johnson called the decision “regrettable,” even though he believes the UNHRC is in need of reform. He argued that the organization is still “crucial to holding states to account.”

The American Civil Liberties Union (ACLU) accused the Trump administration of leading a “concerted, aggressive effort to violate basic human rights.” The nonprofit legal group also called the administration out for its “abusive use of power at home.”

The UNHRC was es

tablished on March 15, 2006 by the United Nations General Assembly. Its purpose is to promote and protect human rights around the world and to address any violations thereof. It has 47 members who are elected for staggered three-year terms.

But not everyone saw the move in a negative light.

Nikki Haley, U.S. ambassador to the U.N., said that the decision to withdrawal was due to corruption and partisanship that exists within the organization.

“For too long, the Human Rights Council has been a protector of human rights abusers and a cesspool of political bias,” Haley said during the announcement.

“Israel thanks President Trump, Secretary Pompeo and Ambassador Haley for their courageous decision against the hypocrisy and the lies of the so-called U.N. Human Rights Council.”