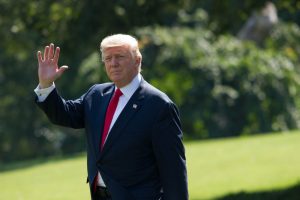 President Trump is known for his anti-immigration policies. Not only did he pitch the idea of building a “wall” between the U.S. and Mexico, but he is also the proud father of the now-infamous travel ban. So, imagine the irony that the president’s own grandfather was a poor immigrant who came to America looking for a better life.

In The Trumps: Three Generations That Built an Empire, author Gwenda Blair gives a detailed account of Donald Trump’s family history. According to her research, the president’s grandfather, Friedrich Trump, first arrived at the Castle Garden immigration center in New York on Oct. 17, 1885. He was just 16 years old at the time.

Like most immigrants, Friedrich Trump came to America with stars in his eyes and hope in his heart. He grew up in a small German town with little to no economic opportunity. In fact, Blair reports that when he first arrived in New York City on the fateful day in 1885, all he had with him was a small suitcase full of clothes.

Civics Lesson: The Journey to America 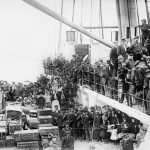 Friedrich Trump rode the S.S. Eider ship to America. Steerage class ticket holders like himself were barely offered one meal per day. There were no bathing facilities and drinking water was limited. It was a 10-day trip. The conditions were so bad that a shipping and railroad tycoon who lived across the street from the Castle Garden immigration center complained about the “smelly immigrants.”

“The stifling lack of opportunity in the village seemed to close in on him. Without any apparent opportunity for a better life, he saw what lay ahead was dreary, difficult, and poor,” Blair wrote in her book. “He seemed to have no choice but to leave.”

His situation was so dire that he elected to leave his native country even though he couldn’t speak English.

“He didn’t know English. He couldn’t possibly have known English,” Blair explained. “He didn’t have anything like a high school diploma. He was literate, but in German.”

As Washington Post contributor Kristine Phillips points out, under today’s policies, Friedrich Trump would have been classified as an unaccompanied minor, otherwise referred to as an “unaccompanied alien child.”