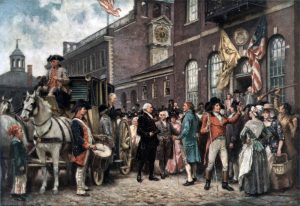 It might surprise you to find out that the politically divisive atmosphere in the United States today is… nothing new. Even in the earliest days of the United States, factionalism existed between the newborn country’s leaders. Our nation’s first president, George Washington, thought hyper-partisanship was such a danger to our fledgling democracy that he warned his contemporaries (and us) about it in his farewell address, published in the American Daily Advertiser on September 19, 1796. His messages still have relevance—perhaps more than ever—today.

George Washington was the first, and probably only, truly independent president in the nation’s history. “I was no party man myself, and the first wish of my heart was, if parties did exist, to reconcile them,” he wrote to Thomas Jefferson.

Washington’s beliefs were rooted in ancient wisdom and Enlightenment-era liberalism. He believed that civil society depends on resisting the urge to move to intolerant extremes on either end of the political system. He wasn’t alone: James Madison and Alexander Hamilton praised the Constitution’s “spirit of moderation” as opposed to the “intolerant spirit” of “those who are ever so much persuaded of their being in the right in any controversy.” 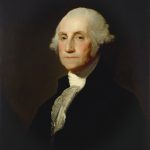 At the end of his second term as president of the United States, George Washington delivered a 32-page handwritten address. In it, he announced that he would not seek a third term as president and expressed his hopes and fears for the new nation, including his warning about the dangers of hyper-partisanship and demagoguery. Although the address itself was largely written by James Madison and Alexander Hamilton, the ideas were Washington’s.

While he was a young man, Washington read many essays written by Joseph Addison in the Spectator of London, and he took to heart the words of Addison’s essay, “The Malice of Parties” about the causes of the English Civil War in the 1640s:

“A furious party spirit, when it rages in its full violence, exerts itself in civil war and bloodshed; and when it is under its greatest restraints, naturally breaks out in falsehood, detraction, calumny, and a partial administration of justice. In a word, it fills a nation with spleen and rancor, and extinguishes all the seeds of good nature, compassion, and humanity.”

When Washington became president, he hoped to establish a government that was above hyper-partisanship. He did not, however, want or expect a Cabinet full of obsequious toadies who would do his bidding without question. “A difference of opinion on political points is not to be imputed to freemen as a fault, since it is to be presumed that they are all actuated by an equally laudable and sacred regard for the liberties of their country.”

Despite Washington’s hopes for constructive differences of opinion in service to a higher good, dissension grew among the members of his Cabinet. He worried that the political divisions that were hardening could bring an end to the fragile, fledgling democracy. “If we mean to support the liberty and independence which it has cost us so much blood and treasure to establish, we must drive far away the demon of party spirit and local reproach,” he wrote to Rhode Island Governor Arthur Fenner.

Washington’s farewell speech at the end of his presidency repeated his entreaties against hyper-partisanship and demagoguery. In a line that we wish had not been deleted from his final address, Washington warned that in a large republic, democracy was unlikely to be undermined by a military coup, even if that coup were financed by the wealthy and powerful. “In such republics, it is safe to assert that the conflicts of popular factions are the chief, if not the only, inlets of usurpation and tyranny.” And President Washington warned that a demagogue could exploit partisan sentiment to usurp the powers of the state:

“However [political parties] may now and then answer popular ends, they are likely in the course of time and things, to become potent engines, by which cunning, ambitious, and unprincipled men will be enabled to subvert the power of the people and to usurp for themselves the reins of government, destroying afterwards the very engines which have lifted them to unjust dominion.”

The solution for partisanship in government, Washington believed, was that although partisanship could not be removed from democracy, it could be “constrained by vigilant citizens and the sober-minded separation of powers.”

On this day, when we celebrate the independence of our nation from Great Britain, let’s take some time to reflect on the effect that growing demagoguery and partisanship over the past decade has had on our democracy. Let’s also take some time to consider what each of us can do to bring some moderation and temperance to our current political climate.