Roe v. Wade Is on the Chopping Block 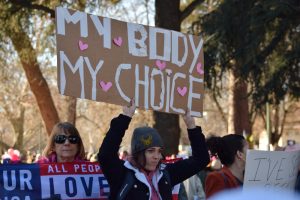 A woman participates in the Woman’s March, holding a sign that reads, “My Body My Choice.” January 20, 2018, Sacramento, California.
Image: Lorraine_M / Shutterstock

This, of course, leaves a huge vacancy that will need to be filled. The president of the United States is ultimately tasked with nominating Supreme Court Justices, as outlined in Article Two of the Constitution. The Senate must then confirm the nominee.

Women’s rights advocates worry that President Trump will appoint a Justice who will overturn Roe v. Wade—a 1973 Supreme Court ruling that legalized abortion nationwide. And those fears have real merit.

On January 23, 2017, President Trump reinstated the Mexico City Policy, commonly referred to as the “global gag rule.” This law restricts U.S. funding to any foreign non-governmental organization that provides abortion services or referrals. Healthcare workers are forbidden from even speaking about the practice.

Civics Lesson: The History of the Mexico City Policy 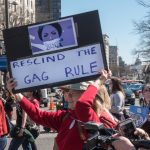 The president even went as far as to say there should be “some form of punishment” for women who obtain an abortion. He has also repeatedly threatened to defund nonprofit reproductive health care facility Planned Parenthood because it provides abortion services.

But perhaps most telling is a recent Fox News interview in which the president suggested that abortion rights be left up to the state.

“Maybe someday it will be up to the states,” Trump said when asked about his Supreme Court Justice pick. “You never know how that’s going to turn out. That’s a very complex question. The Roe v. Wade is probably the one that people are talking about in terms of having an effect, but we’ll see what happens. But it could very well end up with states at some point.”