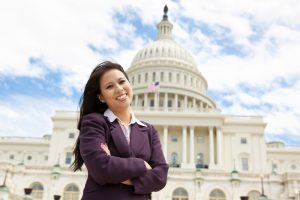 Women are running for election at unprecedented rates, but many face an uphill battle. Photo: Shutterstock

It’s no secret that although women comprise half of the U.S. population, only a quarter of elected positions are held by women. Women’s underrepresentation in politics has been a long-time fact, but there are signs that this is starting to change.

According to the Washington Post, an unprecedented number of women are running for office in 2018, and most of these are Democrats. Emily’s List, an organization whose mission is to get Democratic women elected to office, reports that since President Trump’s election, they have been contacted by more than 26,000 women wishing to run for seats at the state, local, and federal level.

A recent post on the Politico website tracking women in American politics says more women are running for office in 2018 than ever before. In fact, 602 women are running or have said they will run for governor and for positions in the House and the Senate. Of those, 175 women advanced in their states’ primaries, 214 are awaiting primaries, and 213 women lost primaries or dropped out of their races. 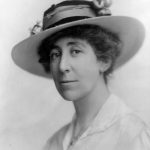 In 1916, Jeannette Rankin of Montana was the first woman to run for office and win one of the state’s At-large congressional seats. This was four years before women even had the right to vote. As a pacifist, she joined a small minority of House members to oppose declaring war against Germany in World War I. Rankin ran for Senate in 1918, but she didn’t win. After that, she left the political scene until 1940, when Montana’s voters elected her to a second and final term in the House. As she was still a devoted pacifist, she cast the only vote against the U.S. declaration of war on the Japanese after the Pearl Harbor invasion, effectively torpedoing her career. (Photo: Public Domain)

Women make up nearly 20 percent of Congress, but as things stand, they could conceivably claim even more seats. Currently, 84 women are serving in the U.S. House of Representatives, but Politico says that number could grow to 234. They could also make “substantial gains” in gubernatorial races.

But even in the cases where there are more women candidates, that doesn’t mean that more women will win. For example, in 1992, 29 women ran for seats in the U.S. Senate and only five of them won. In 2012, 36 women ran and 11 won. However, in 2016, 40 women ran for election to Senate seats, but only six won. More women running for governor has not, unfortunately, increased the number of women who actually won those seats. In the House, however, more women running did increasing their representation in that body

Unfortunately, U.S. political parties have not made the recruitment of female candidates a priority; one survey found that 51 percent of women candidates and elected officials had not been encouraged to run for office—and in some cases, they were actively discouraged from doing so. Women candidates often face disparities in funding for their campaigns as well. The majority of campaign funding in the U.S. comes from private donors, and women report that they often find fundraising more difficult than their male peers.

What does this all mean? If a woman is running for office in your state, support her by contributing either money or time to her campaign. If your local paper offers letters to the editor, write one in support of the female candidate. And by all means, get out and vote in your state’s primaries and general election.