Propaganda of Authoritarianism: the GOP’s Threat to Liberal Democracy 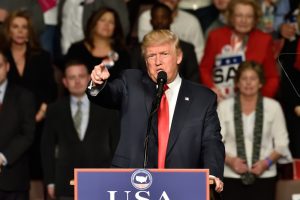 President Trump speaks at one of his many rallies. Photo by Evan El-Amin / Shutterstock.com

Former GOP strategist Steve Schmidt, who quit the Republican party over its immigration policy, recently made it known in a tweet that he believes “the only party left in America that stands for what is right and decent and remains fidelitous to our Republic, objective truth, the rule of law and our Allies” is the Democratic Party. In another tweet, he said that “the GOP has become a danger to our democracy and values.”

Why this harsh criticism of the party for which he spent many years developing election strategies and helping it rise to power? On June 26, Schmidt appeared on MSNBC to talk about why he did it and the troubling things he sees happening in the Republican party. 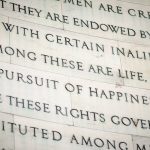 Liberal democracy is a political ideology and a type of government in which representative democracy operates under the principles of classical liberalism. Also called western democracy, these governments hold elections between multiple distinct political parties, have a separation of powers into different branches of government, the rule of law in everyday life as part of an open society and the equal protection of human rights, civil rights, civil liberties and political freedoms for all people. Liberal democracies often draw upon a constitution to delineate the powers of government and make an official social contract. During the 20th century, liberal democracy became the predominant political system in the world.

But, Schmidt warned, President Trump is acting more like a dictator than a president of a democracy, and he goes on to describe five things the president has done to earn that dubious distinction:

“This president is an autocrat. He is not a small-D democrat. He doesn’t believe in liberal democracy, and what we’re seeing every day are five behaviors:

1) He incites fervor in a base through constant lying;

2) He scapegoats minority populations and he affixes blame for complex problems to them and them alone;

3) He alleges conspiracies that are hidden and nefarious, and linked to those scapegoated populations;

4) He spreads a sense of victimization among those fervent supporters; and,

5) He asserts the need to exert heretofore unprecedented power to protect his victim class from the conspiracies and from the scapegoated populations.”

When democracies fall, Schmidt said, you’ll find those five behaviors in people trying to tear it down:

Schmidt said that the western world is seeing a regression from liberal democracy. For example, in Poland and Hungary, there’s been a rise of “far-right ethno-nationalist parties.” He reminds us that “the last time this happened, it unleashed a tragedy the likes of which the world has never seen.”

Our institutions of democracy depend on a system of checks and balances that are increasingly being thrown out of balance by the GOP’s actions in the House and Senate, and in the rise of the use of executive orders by the president. President Obama certainly did use his executive order power, and even earned a Supreme Court rebuke for one of them on immigration, but President Trump has stated that he wants to sign as many executive orders as he possibly can. He is currently on pace to surpass the last five presidents in executive orders signed per year.

“I think there’s a real lack of imagination in this country about how fragile these institutions are,” Schmidt warned. He’s right. If we don’t hold our president and Congress accountable for sustaining rather than undermining our democratic principles, we could find ourselves in a very dangerous place.